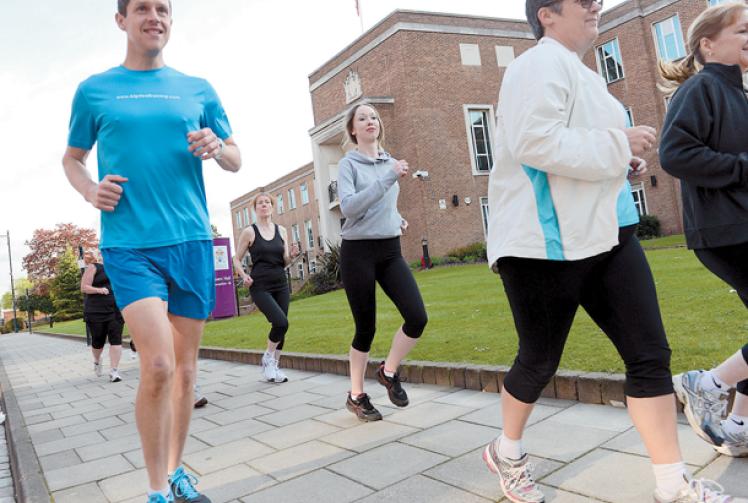 THE Fit for Life project is an initiative funded by Sport England to encourage more people to be active. As part of the scheme the Royal Borough’s sports development team has organised a 12-week after-work running club for Maidonians. Reporter KATHERINE DENHAM joined them for their sixth week.

The time had come to work off all of those chocolate eggs I had consumed over Easter, and I have to say I was a little nervous about the thought of a fitness coach cracking a whip while I ran circles around Maidenhead.

I had visions of a fitness dragon, the Alan Sugar of running clubs ordering us to drop down and do press-ups in between laps of the park.

So I was somewhat relieved when I met personal trainer Eddie Johnson who would be leading the session.

From the minute I stepped out onto the grass in front of Maidenhead Town Hall with my fellow runners, I realised Eddie’s method centred on encouragement, not punishment.

Standing in a circle to warm-up, myself and about 10 other women did our best to mimic Eddie – whose legs seemed to come up to his shoulders - in a sequence of exercises, including lunges, hip rotations and knee lifts.

Despite the apparent serenity of my fellow runners, I couldn’t help feeling apprehensive about what was to come, and before I knew it we were jogging behind blue-clad Eddie along the High Street, past Sainsbury's superstore and into Kidwell Park.

We had a natter as we ran and I was interested to hear about the progress made by those involved.

Claire Fanning, an enquiries and digital officer at Maidenhead Library, said: "The biggest thing for me has been learning how to control my breathing."

We jogged to the far side of the park where we were instructed to run as fast as we could with raised knees and hands pointed to the sky.

The main bulk of the session was to run continuously for as long as we could within a 20-minute time-slot.

Each individual had a personal best to try to beat.

The mum-of-two had spent weeks in an intensive therapy unit in 2002 after a vehicle had collided head-on with hers.

The student nurse told me that before the accident she had been actively involved in sports, mainly ice-hockey, and over the years has been working to ease herself back into a fitness routine.

“My kids start at Wessex Primary School in September which means I’ll have even more time on my hands to exercise.

“I’m hoping to get fit by the time I’m 40, so classes like this help me achieve that goal.

“Otherwise I would just be sat on my bum in front of the TV,” she laughed.

We skirted around a dog that barked aggressively at our ankles as we passed.

"They’ve given us obstacles this week," joked Sara.

By talking I almost felt oblivious to the exercise and before I knew it we had run for 17 minutes without stopping.

Sara told me that when she started she could only run for about three or four minutes before she would need to walk, and that she no longer gets out of breath when walking up stairs.

I’m impressed that a few sessions with a running club are capable of making such a difference.

We all jog back to the town hall to do a five-minute stretch and I speak to 51-year-old Sarah Ellis, of Furze Platt Road, who tells me she finds running in a group motivational.

“I was worried that I would look silly running, especially on my own, but I’m not embarrassed anymore.

“I also find talking helps take your mind off the running, though just think how much better I could do if I didn’t talk!” she laughed.

National manager for Guide Dogs Katie Hepworth tells me if she wasn’t at the club then she would still be in the office.

The 45-year-old said: "I’m the kind of person who needs the structure of a course and after I signed up I was determined to do it.”

Chatting to these women made me realise the club is more than just a work-out.

It’s an opportunity for people to find ways of integrating exercise and friendships into their busy lives.

But more importantly it's about improving confidence and a sense of mental well-being.

I certainly had a spring in my step as I made my way home.