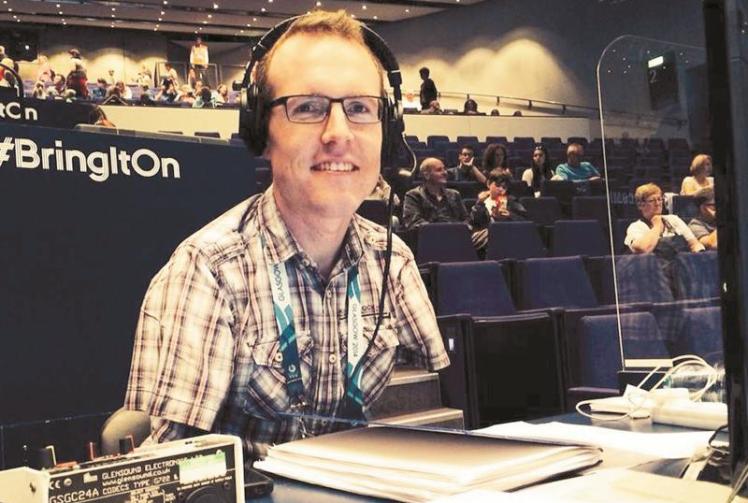 TV sports producer and broadcaster Andy Stevenson said he was ‘chuffed’ to be named as one of the most influential people with a disability in the UK.

The Datchet resident was named on The Shaw Trust Disability Power 100 List which is compiled annually by an independent judging panel, chaired by Kate Nash OBE.

Stevenson was born, in his own words, ‘without a full complement of limbs’ – very short arms and no hands, and his left leg only comes down to knee level, so he wears an artificial leg.

He has become one of the most experienced and senior people in the media industry to have a disability.

He works for TV production company Whisper Films and has helped them win the contracts to produce the Channel 4 television coverage of the 2018 Winter Paralympics and 2020 Summer Paralympics.

He was series producer in PyeongChang earlier this year and is expected to play a similar role in Tokyo.

In the lead-up to the Rio 2016 Paralympics, Stevenson was a commissioning executive within Channel 4’s sport team and at the Games themselves he reported for BBC Radio 5 Live, as he had done at London 2012 and the Glasgow 2014 Commonwealth Games.

He can also be heard as an occasional football reporter on 5 Live and BBC Final Score.

“I am honoured and a little bit chuffed to make the Shaw Trust Disability Power 100 List and I want to thank everyone who has helped me get here,” said Stevenson.

“Early in my career, I wanted to focus on being myself and doing a good job rather than being known as ‘that guy with no hands and one leg’.

“But now I see that I have a responsibility to help younger disabled people looking to break into the media industry, and this recognition will hopefully help me do that.”