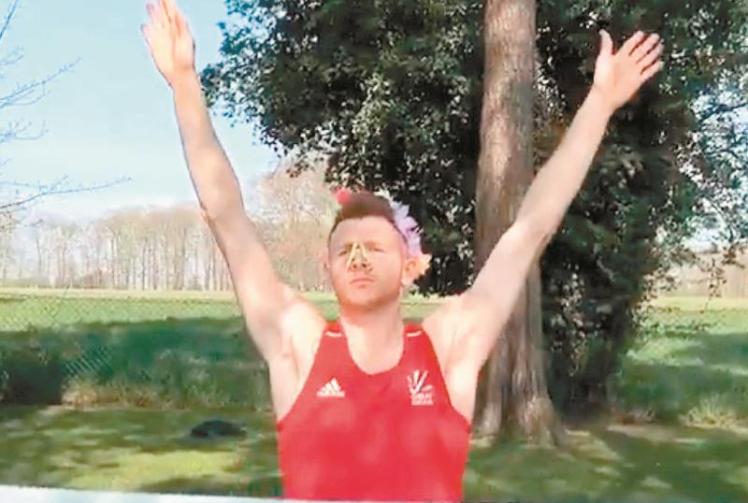 The Marlow-based Great British hockey player Sam Ward has inspired his fellow Olympians by creating his #isolationolympics videos on social media, and has helped inspire a new campaign to raise funds for the British Red Cross during the coronavirus lockdown.

Ward suffered irreparable retina damage in November last year when he was struck in the left eye by a ball travelling at about 50mph.

He was playing in an Olympics qualifier against Malaysia and was looking to complete his hat-trick when the incident took place.

The impact of the blow shattered the forward’s eye socket and caused seven facial fractures, leaving him effectively blind in one eye.

Incredibly, Ward – who has scored 72 international goals in 126 caps for Great Britain and England – is still plotting a sensational return to the GB squad for the Olympics, now delayed until next summer.

But, during lockdown, he’s found a novel way to entertain himself, his family and his followers on social media.

Ward starting creating videos of himself in his home and back garden trying out various Olympic sports, from fencing to rhythmic gymnastics, and members of the public have followed suit.

Off the back of it Team GB began a week long campaign – the #isolationgames - to raise the profile of, and funds for, the crucial work of the British Red Cross during the COVID-19 crisis. Many athletes got involved. Gymnast Max Whitlock used his sofa as a pommel.

Canoeist Liam Heath, from Maidenhead, swapped his canoe for a unicorn, while track and field star Katarina Johnson-Thompson took on her dogs in the heptathlon. The TikTok videos produced had over 200million views and 23million likes.

Ward said: “It’s been amazing how many people have got behind the #isolationgames. It’s for a fantastic cause and hopefully we helped support the British Red Cross at this time. I’d like to say thanks to everyone who got involved and those who also donated.”

Ed Jones, Team GB’s head of marketing, added: “At a difficult time, Team GB is happy to play our small part in keeping the nation active and entertained, whilst also supporting the work to combat COVID-19.

“This TikTok #challenge brought together all of those intentions in a fun and accessible way. It has exceeded our expectations on every single front, bringing athletes and members of the public together at a time we needed a lift.

“Most importantly it’s increased donations and raised the profile of the amazing work the British Red Cross are doing for our communities and in support of the NHS.”

England Hockey taking steps to get clubs back up and running