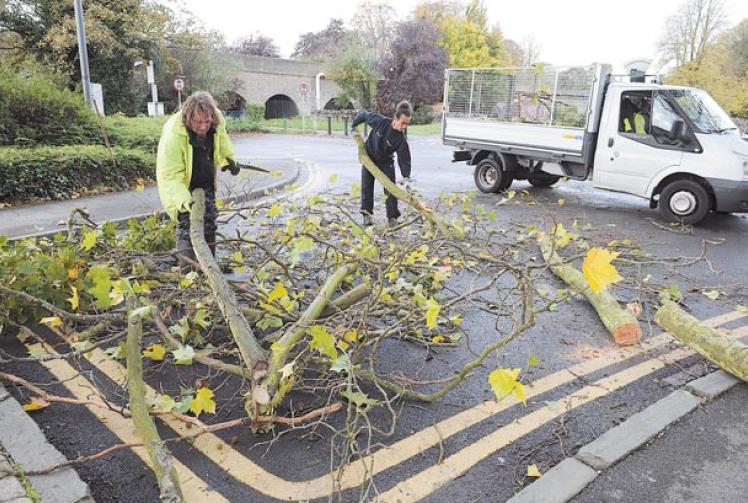 A clean-up operation has been taking place across Slough, Windsor and South Bucks this week after the St Jude Storm swept through the area on Monday.

Hundreds of trees were brought down by the high winds, leaving commuters facing delays.

Gusts of up to 55mph were recorded in Berkshire between 6am and 7am, with an average wind speed of 25mph.

Yesterday a Slough Borough Council spokesman said it had dealt with about 90 fallen trees across the town, including five in Upton Court Park alone, and there was some localised flooding.

More than 200 trees fell in Buckinghamshire, and about 40 toppled in the Royal Borough.

Tree surgeons from Beechwood Tree Care Ltd, contactors for the Royal Borough, were still out on Tuesday dealing with the aftermath.

"It was one of our busiest days of the year, one tree landed on a car and a tree had fallen on someone's property, they were the ones we have had to react to straight away," said Kim Verran, office manager of the Wargrave-based company.

"A lot of the guys had to do overtime to deal with all the enquiries."

Services run by South West Trains did not begin until 9am on Monday, and delays were caused after a tree fell on the line between Datchet and Sunnymeads. Full services across the network resumed on Tuesday.

There were delays and diversions on First Berkshire bus services, after trees blocked Straight Road in Old Windsor, Langley Park Road and Station Road in Langley, and Colnbrook by-pass.

Other roads which were blocked included Horton Road, Winkfield Road, Oakley Green Road, Slough Road, Osbourne Road and the A30 in Sunningdale.

Trees also fell across the river at Baths Island and Romney Lock cut.

Windsor Great Park's car parks were closed during the early part of Monday morning but re-opened by lunchtime.

The storm was named after St Jude, one of Jesus' 12 apostles, who is the patron saint of lost or desperate causes. It caused a number of fatalities elsewhere in the country

Meteorologist Roger Brugge believes there is more windy weather on the way this weekend.

"There were signs from the forecast and even before Friday morning it was projected that winds would track across the British Isles," the Maidenhead resident explained.

"The wind came across the Atlantic first thing in the morning on Monday and was located just off south-west Wales and rapidly moved across a north-easterly direction towards Denmark by lunch-time.

"It was enough to bring down some trees but we got off pretty lightly compared to places on the south-coast.

"We will more than likely be having a windy spell on Saturday and Sunday."

An article in the Express at that time likened the impact on the area to the 'aftermath of war'.

A woman was killed when a chimney stack collapsed at the Harte and Garter Hotel in Windsor.

Barry Avenue and the King Edward Court roundabout were among the roads in Windsor which were blocked by fallen trees, and Ascot found itself completely cut off, with all main routes blocked.

At least 1,000 trees were brought down, with Black Park, Langley Park, Cippenham Park and Salt Hill Park all badly affected, along with Burnham Beeches, Herschel Park and others.