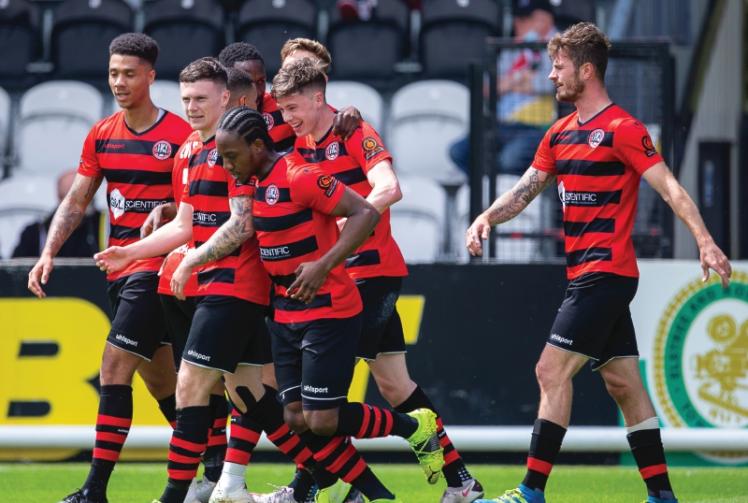 Maidenhead United boss Alan Devonshire has admitted he's resigned to losing the likes of Danilo Orsi-Dadomo and Josh Coley following their impressive seasons for the club, but he'll keep his door open if they don't get the move or offer they're looking for.

With the curtain having come down on the season with Saturday's entertaining 4-1 win over Boreham Wood, the Magpies boss is in the process of piecing together his squad for next season, with pre-season training set to start again in just five week's time.

As ever there's likely to be plenty of turnover, with players out of contract and potentially seeking a move to a higher league or bigger club, but he's confident the core of last season's squad will remain at York Road.

There were glimpses of the future in Saturday's resounding win, with former youth players Reece Smith and Josh Kelly finding the net, but some of the players who have made Maidenhead sparkle at times this season won't be staying on, and there's not a lot Devonshire can do about that.

“Listen, at the end of the day we've got some good kids coming through,” he said. “We will probably be losing Coley, he'll be going into the league, and probably Danilo as well.

“There’s not a lot we can do about that. It’s out of our control.

“The mainstay of the players will hopefully stay, and we’ll try to add a few to make us stronger.

“But we’ll need to be stronger because I think the league will be stronger.

“There are seven or eight players who have already committed. But we're not putting that information out there until we know what the core of our squad is going to be.

“That will likely happen in the next week or two. It's hard work at the moment. We're still working to get the players we want and there are some big decisions to make.”

With the play-off contenders who miss out on promotion likely to strengthen again, and Southend and Grimsby dropping down into non-league football from League 2, Devonshire expects with good reason that the division will be tougher than ever next season. Other clubs effectively 'downed tools' midway through the season when the threat of relegation was taken away, and Devonshire expects they'll be looking to bounce back with a renewed sense of determination, and supporters allowed back through the turnstiles.

However, he feels the club has made progress in the last couple of seasons and, if he and his son Lee can get the recruitment right again, he sees no reason why the club can't continue punching above its weight.

“The chairman has said we don’t have the biggest budget in the league, far from it. But at the end of the day, it is what it is, and we have to maybe go for younger players to maybe give them an opportunity and then it’s up to them.

“If they do well for us, which the boys have this year, they will get a move into the league. That’s something we just have to accept.”

Orsi-Dadomo - who finished as the club's top goalscorer with 21 goals - and Coley have certainly used the Magpies as a springboard for their playing careers this season. And Devonshire would never stand in the way of players' progression.

“Definitely, the kid’s (Danilo) 25 and he’s out of contract so there will be offers for him,” he said.

“He’s got his head screwed on though and he’s learnt a lot in a short time. You do get late developers in football and I think he’s one of them. Wherever he goes he’ll score goals.

“There’s plenty to do, me and my son won’t stop now.

“We’ve got targets we’re working on. We started over a month ago.

“Hopefully we’ll have good news on those in the coming weeks. But we’re back in for pre-season in five weeks.

“The lads have enjoyed it. They’ve learnt and we’ll always keep the door open for them.

“We’re honest with each other and if there’s a chance of keeping players because they don’t get the offers they want or the league they want then we will talk.”

Devonshire may well have taken 13th place and 56 points before the season started but given their fine form in spells this season and the potential of the squad - one of the most talented he's had at his disposal - he admits he felt they could have done a little better.

Injuries, suspensions, and a hectic fixture list in the final weeks of the season caught up players and led to some jaded displays. But that wasn't the case in Saturday's 4-1 win at Boreham Wood and they leapfrogged their hosts in the process.

“Listen at the start of the season we’d have taken it,” he said.

“The way the season has gone, maybe we’re a little bit disappointed.

“I felt we could have done a little bit better. Injuries caught up with us a lot, late on in the last 10 games.

“But listen it’s about progress, and we have progressed in the last year or two. It’s about keeping that going now and we’ll try and push up.

“I wouldn’t say we were ever up there. Other people were saying we were up there. We had lots of games in hand, but listen it is what it is.

“We’ll have the fans back and we’ll get back to the real grit of it. I feel like a few clubs gave up this season and didn’t push on with the furlough stuff and that. But it will be all systems go from next season and there are some big clubs coming into the league with Southend and Grimsby.

“The ones who fail to go up in the play-offs, I’m sure will be putting money into it for next year.

“We know it’s a difficult league and we’ve just got to see how we go.”

Dream of Dreams wins the Jubilee Stakes at Royal Ascot

Comley 'disappointed' by Maidenhead United's decision to let him go