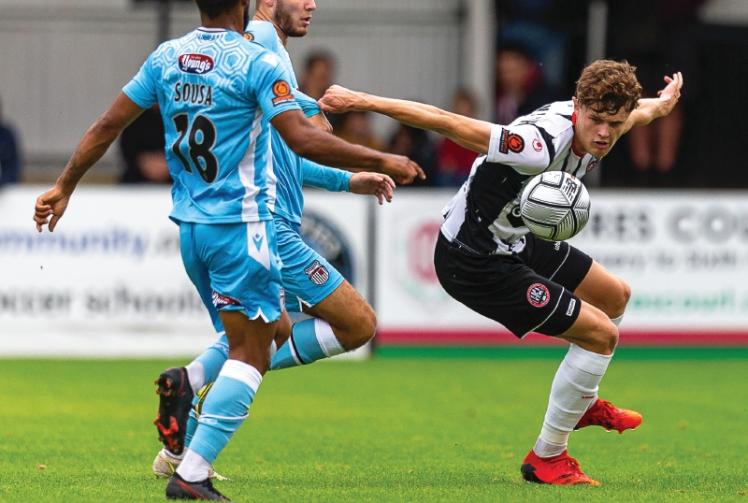 Left-sided defender Sam Beckwith has re-signed for Maidenhead United on a permanent basis having more than played his part in United's encouraging second half to the 2021/22 season.

Having signed on loan from Championship side Luton Town, Beckwithbattled for possession of the left-back berth with George Wells, who this week announced his return to Slough Town after a two-season stint at York Road.

Last Wednesday (June 15), Beckwith put pen to paper on a permanent deal to play for Alan Devonshire's side, and the Magpies are currently building a squad they believe can press on and improve on last season's 17th placed finish.

The 20-year-old tweeted his excitement at the move, saying: “Buzzing to be back at Maidenhead United. Can’t wait to get going again and see you fans back at York Road.”

Beckwith made 29 league appearances for the Magpies last season and was utilised as a defensive midfielder in his first game before being deployed at left-back. He couldn’t get on the scoresheet but did pick up four yellow cards.

Ashley Pugh, who works for the agency which represents Beckwith, said: “Sam had a great season at Maidenhead last year so when we heard of the interest to take him permanently after his release from Luton, we were happy to open talks.

“Sam loved his time there and it was clear that players, staff, and fans liked having him around, so we were delighted to get a move done that helps Sam into the next chapter of his career.”

Maidenhead United fans will be able to purchase 2022/23 National League season tickets online from today (Thursday), and in person, from Stripes Bar, on Tuesday, June 28.

The bar will be open between 7.30pm and 9pm for fans to buy their tickets and get an exclusive first look at the new Uhlsport kit designs for the 2022/23 season.

This is the Magpies' sixth successive campaign in the National League, and they'll face no fewer than 12 ex-league clubs.

A limited-edition booklet produced by Magpies photographer Darren Woolley and priced at £2, is also set to go on sale.

The book features a selection of photographs taken from the past few years, documenting a period when the club battled to establish itself in the National League while coping with the COVID crisis.

Proceeds from book sales will go to the Maidenhead United Community Trust.