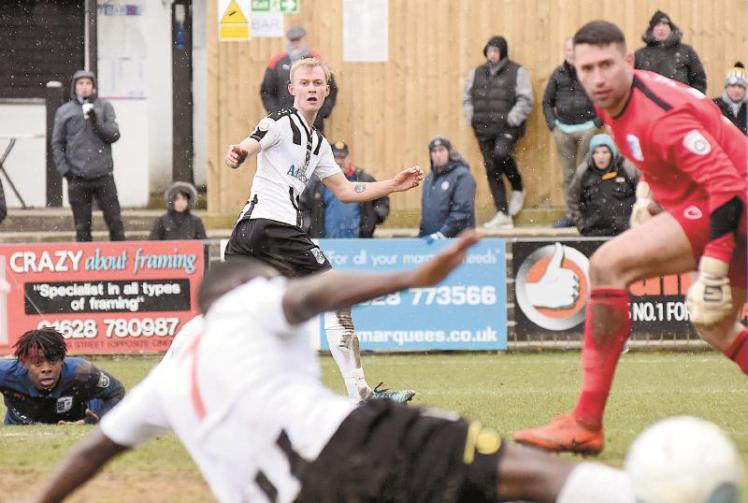 Maidenhead United’s season looks like it could be in danger of petering out after the Magpies were deservedly beaten on home soil by struggling Barrow AFC.

Luke James’ drilled finish in the early stages of the second half proved the difference, and the visitors held on for all three points quite comfortably, despite seeing Bedsente Gomis sent off with 15 minutes left on the clock.

A bright start by the home team quickly fizzled out, after James Comley’s shot from the edge of the area was blocked away in the 5th minute and Sean Marks appeared to be hauled down in the box

Barrow edged proceedings thereafter, without ever having the quality to truly test Carl Pentney in the Maidenhead goal.

Gomis send a low shot scuttling wide in the 10th minute and James’ flick, after good work from the impressive Lewis Walters, was blocked by Jake Goodman in the 21st minute. The best chance of the half came two minutes before the interval, and it fell to the hosts, when Comley put Moses Emmanuel clean through, but Steve Arnold stood up well to keep out his shot.

The second half was only four minutes old when Barrow took the lead. Again Walters caused havoc down the left and put in a low cross for James to beat Pentney with a low shot. Further goals could, and should, have followed in the aftermath, with Pentney saving well to keep out Walters and Nathan Waterston blazing wildly over from inside the six yard box.

Maidenhead rallied, with substitute Sam Barratt firing inches wide of the post on the hour mark. But despite having the man advantage in the latter stages, and Devonshire throwing on Jake Hyde and Ryan Upward to try and shake things up, the visitors comfortably held on.

“We looked tired, the pitch is heavy, but I’ve got no excuses. It was a poor goal to give away, we have to press the ball. Their centre forward (James) terrorised us in the second half.”