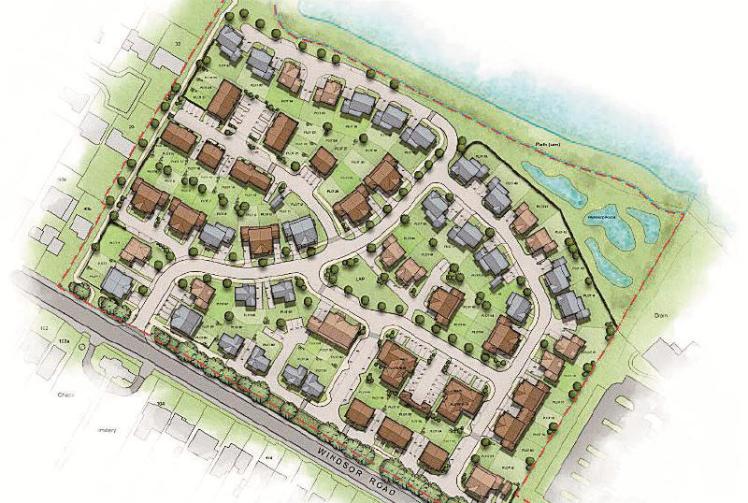 Plans for 99 homes next to Thames Hospice have been recommended for refusal by Bray Parish Council.

The site – next to the Thames Hospice on Bray Lake – is allocated for development in the Borough Local Plan and there ‘is no getting away from that’, parish councillors admitted at a meeting on Monday.

Nonetheless, the parish council voiced concerns over the detail – or lack of detail – in several parts of the application, sent in by developers Shanly Homes (in partnership with Summerleaze).

A key concern for Bray Parish Council is air quality, as the site sits is on the edges of an Air Quality Management Area (AQMA) – an area where air quality is poor enough that it is being monitored.

But in the documents submitted with the application, ‘there’s a lot of talk about keeping dust down rather than NO2’.

Bray Parish Council was not convinced of the projected number of predicted car journeys – 51 two-way journeys at the AM peak, and 49 in the evening.

“The bus services are poor – there’s a transport rationale that says it’s perfectly possible to get from Windsor to Maidenhead – have they tried it?,” said Bray village ward councillor, Ken Elvin.

Another concern is the question of access. A new access point is planned as part of the proposals, leading directly onto the site from Windsor Road.

Councillors said this was not what was ‘promised’ originally, when earlier discussions for the site and the Thames Hospice site were taking place.

“Part of the justification for the hospice was that the two sites would use the same access,” said Chris Graham, also of Bray village ward.

The councillors were also concerned that the width of the road at 5m may not be wide enough.

If there are problems with the road, concerns were raised that the highways authority (the Royal Borough) may not ‘adopt’ it as maintainable at the public expense, i.e. it may not maintain or service the roads.

Bray Parish Council believes there are about 38 public objections (not all of which are yet logged in the Royal Borough’s planning portal).

Key concerns include those regarding the environmental and traffic impacts – as well as a lack of planned shops or a doctor’s surgery to support the increase in residents.

“Everyone who’s wrote in is against it – no one’s in favour,” said Cllr Elvin.

In a previous response to traffic concerns, a Shanly Homes spokesperson said: “The adopted plan is supported by a wide range of studies and traffic modelling. Therefore, the highways impacts have been accounted for as part of the plan’s examination.

“The planning application is also supported by a site-specific transport assessment which demonstrates the proposals will not result in a significant increase in vehicular traffic on the Windsor Road.

“The highways authority are consulting on several projects along the A308 corridor which are anticipated to strengthen the local highway networks capacity.”