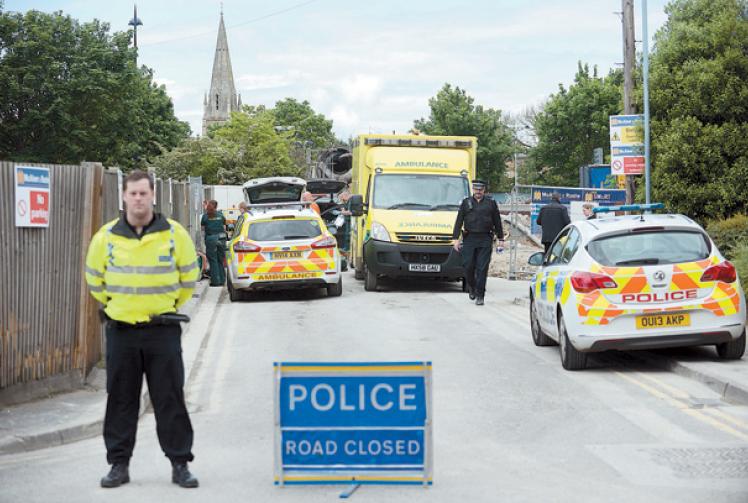 Fatal injuries received by a construction worker at the Premier Inn site in Maidenhead were similar to a 'high velocity gunshot wound', an inquest heard today (Wednesday).

The jury at Reading Coroner's Court was told yesterday that on the day of Mr Wylie's death, workers heard a loud bang and Mr Wylie was seen holding his chest and spitting blood. None of the witnesses at the inquest said they saw exactly what had happened to cause the bleeding.

Mr Wylie's colleague Danny McKeegan said yesterday in the moments leading up to his death, when he had been working on greasing the tracks for an SR 70 piling rig, used for digging foundations, Mr Wylie ‘seemed to know what he was doing’ and did not seem to be doing anything ‘dangerous'.

In the statement he listed the worker’s injuries as a minor abrasion to the chin and an ‘injury complex’ on the lower right neck and upper right chest made up of two ‘well defined puncture wounds’.

He said he suspected the injuries were caused by 'jets of grease' rather than a metal object, adding: “The injuries are not dissimilar to a high velocity gun shot wound.” Grease was found in Mr Wylie's body during the examination.

The inquest had previously heard on Monday from Mr Wylie’s co-worker Robert Foster, who told the court the day before Mr Wylie’s death he heard a ‘loud bang’ while reversing his Soilmec SR 70 piling rig. Colleagues saw a small metal part, known as a 'grease nipple', had broken off, causing grease to leak out.

The damage was reported, Mr Foster said, but repairs could not be carried out until the following day.

The jury also heard evidence from Noel Kearney, who had been called to repair the grease nipple.

Mr Kearney had arrived at the site on the Tuesday and taken the nipple away to be repaired. The jury heard he carried out a repair by welding a smaller nipple onto the damaged part.

Mr Bedford asked Mr Kearney if, rather than doing the welding, it occurred to him to buy a new nipple and adaptor. Mr Kearney invoked his right not to answer.

Today, the jury heard from Owen Pritchard, who at the time of the incident was a service manager for Soilmec.

When asked about the failure of the grease nipple part, he said: "If the correct procedure had been followed, I doubt this would have occurred.”

He said the nipple should have been replaced, not repaired, adding the welding decision was 'totally inappropriate'.