VIDEO: Theresa May talks to the Advertiser about Brexit and the battle for No. 10

Fresh from the launch of her bid to become the new leader of the Conservative Party and Britain's next Prime Minister, Theresa May visited the Advertiser offices on Friday, July 1, to speak to editor Martin Trepte and assistant editor Nicola Hine about Brexit and the battle to become PM. 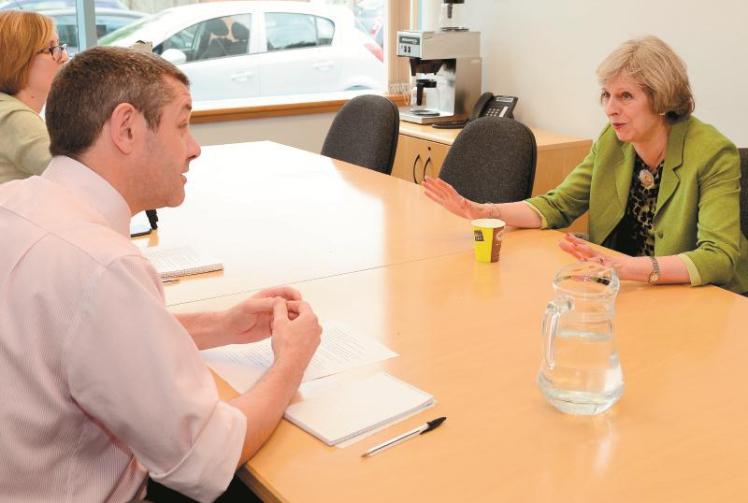 Getting the best deal from the EU negotiations is the imperative task facing whoever succeeds David Cameron as Prime Minister – but the top job isn’t all about Brexit.

Theresa May stressed the successful candidate should be the one who is able to lead a united government which works better for its people on a day-to-day basis.

Maidenhead’s long-serving MP firmly believes she has what it takes to lead the country in its most challenging hour and steer it safely through the stormy waters that await.

“There are huge challenges ahead and there is obviously the need to negotiate the best possible deal for Britain in the Brexit negotiations. But it’s also important that government carries on,” the 59-year-old said.

“We have a manifesto to deliver. We were elected on that last year.”

She continued: “I think I’ve got the proven leadership and the ability to unite the party – but also a vision for the future which is about a government that is there for all people and for all parts of the country.”

The Sonning resident became the early favourite in the leadership contest, winning the backing of prominent colleagues including Sir Eric Pickles, Philip Hammond and Michael Fallon. But she has faced a backlash from those who believe the next PM should be a leave campaigner prepared to trigger Article 50 and remove the UK from the EU.

Mrs May was pro-remain, although she said Britain was strong enough to be successful in or out.

“Yes, this area did have a majority for remain [the Royal Borough result was 53.9%] but that wasn’t the result collectively across the whole country.

“What’s important is that in the negotiations we get the best possible deal in terms of trade in goods and services, and services are particularly important for the UK, in particular financial services. We must recognise that the vote, for a lot of people, reflected concerns about free movement and so we can’t allow free movement to continue as it has done until now.”

She continued: “I’ve said I would create a new government department that would be given the job of doing the Brexit negotiations. The department would have a secretary of state who was somebody who had been on the leave side, so there would be no doubt for people the government was committed to leaving.”

But she was keen to point out the job is about more than just Brexit.

“There’s the task of doing the other things the government does as well, delivering on the manifesto on which the Conservative Party was elected to govern last year. There’s a need to keep the United Kingdom together, to unite the party and also to reach out across the whole country,” she said.

“I think there are some people who feel the world has gone on and left them behind and we need to address that.”

Mrs May said she did not have a leadership bid prepared as she did not expect David Cameron to stand down as quickly as he did. She claimed she has not offered supporters jobs and, should she be successful, will instead look at the party as a whole before she builds her team.

When asked about her vision for the country, the Oxford University graduate said: “I haven’t set out specifics yet. Obviously I will say some more as we go through the process, but in terms of yesterday [Thursday, June 30, the launch of her campaign] the aim was just to set the vision and the direction of travel.

“I think there are many ways in which it is possible to ensure government is working rather better for people. One of the things I’ve done in the Home Office is try to ensure the parts of government I’m responsible for are actually doing their job in the best possible way in terms of the public who are on the receiving end. I think that’s very important.”

A key proposal in the Conservatives’ 2015 manifesto was that of a British Bill of Rights, to replace the Human Rights Act 1998, and Mrs May intends to press ahead with this.

“In departmental terms it’s been Michael Gove’s responsibility to deal with that, it comes under the Ministry of Justice, but a lot of work has been done,” she said.

“So I would expect to continue with that. I made some comments previously about the European Convention on Human Rights, on which there is not a Parliamentary majority to come out of that, so I wouldn’t be pursuing that, but the need to ensure that we are making changes which give us some better ability in terms of dealing with human rights issues here in the UK, I think is important.”

Mrs May, who says her approach to politics is to ‘get on’ with the job in hand, said she has been pleased by the support she has received so far.

When asked what kind of a party she thought she would inherit, following the inevitable divisions caused by the EU debate, she said she had seen a real desire among members to reunite in its aftermath.

“There was a recognition people were on different sides, for some people these were long-held views, but that we’d got a job to do in government and so we should come back together,” she said. “I think there’s a real feeling in the party for that unity and a momentum for it.”

Viewed by many as a ‘grown-up’ politician, she also shared her thoughts on the public schoolboy antics often seen within the Commons.

“People have fervently held views and so there will still be debate and it can sometimes get heated in Parliament in that sense,” she said.

“But I think what is important for the public is they actually see the delivery and we’re not just debating for the sake of it. I also think there’s a need for them to feel politicians are being honest with them about what the problems are and how to resolve them. I think they want to feel that politicians are looking at the issues, understanding the problems people feel, not just getting caught up in a Westminster bubble, but actually out there recognising that for many people life can be a struggle.”

She acknowledged the impact the role of Prime Minister would have on both her personal security and her personal life but said she would remain as active as possible in Maidenhead.

“If I do become Prime Minister that will naturally limit my ability in terms of the amount of time I would have to be in the constituency, but I think with good management I can still ensure I am serving the constituency well,” she added.