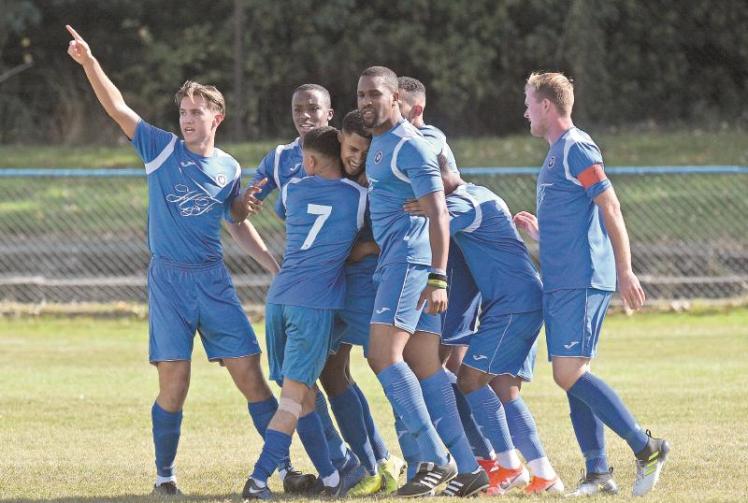 Mark Bartley saw his side overcome a hoodoo of successive draws to snatch a 1-0 win and three points on home turf against 18th placed Hertford Town this afternoon.

New signing Nnamdi Nwachuku made his first start for the club, a player boss Bartley brought in to bolster Marlow’s options in attack.  The debutant certainly proved his worth and opened his account of his new club by netting the only goal of the match on the 72nd minute with a composed finish.

The victory keeps the Blues in 12th place of the Isthmian South Central and gives them some confidence to go forward in their season having overcome a cursed spell of four consecutive league draws.

The game was rather a tale of two halves as the first 45 minutes presented very little opportunities by either side with chances at a premium. Conditions underfoot made it difficult for both teams to produce any worthy attempts in the final third to trouble the respective goalkeepers.

Hertford had the first real chance at goal when the ball fell to Ben Weyman who hit a low drive into Simon Grant’s gloves from the byline.

Moments later, Ashleigh Artwell found Curtis Ujah at the back post with a free kick but the defender’s header didn’t have enough on it to trouble Garry Malone.

But it was the final 10 minutes of the half that Marlow really stepped up a gear. New signing Nwachuku had a golden opportunity to open the scoring when he found himself one-on-one by a well weighted through ball from Kwai Marsh-Brown. The number 18 tried to lob the onrushing Hertford keeper Garry Malone but the ball went agonisingly wide.

Minutes later, Louis Rogers found himself on the end of a whipped corner kick, hitting a half-volley narrowly over the bar.

Nwaschuku had one last chance himself to give his side the advantage going into the break but Malone was on hand to beat his effort away and keep the scoreline all square on the halftime whistle.

The Blues maintained the tempo well into the second half but at the risk of leaving themselves exposed at the back. Just before the hour mark, the visitors launched a swift attack countering from a Marlow corner. Luke Gymer sent a low teasing ball into the box that the Blues defenders could only fumble around the area. Grant eventually got his hands to it and the Blues were able to breathe a sigh of relief.

It looked like it wasn’t to be Marlow’s day, as the fans started to murmur their frustration, suspecting their team would succumb to another draw after a series of shots went just wide of the target.

But in a moment of individual brilliance, Nwachuku stamped his mark on the game with some impressive dribbling and a close range finish with twenty minutes to go to put the fans in high spirits.

In a nervy finish to the game, bodies were then thrown on the line and in the way of Hertford’s forwards with substitutions Kit Brown and Dane Batt having good chances to level the scoring.

Artwell had an opportunity to put the game to bed after he created some space within the penalty area but the number 16 was harried and hassled away out of danger after failing to pull the trigger.

The Blues could’ve been home and dry a lot sooner had Kelvin Bossman listened to his defender Ujah’s instructions to put the ball in the corner and wind the clock down. The striker, who replaced Nwachuku, elected to have a shot however, evidently desperate to get himself on the scoresheet also.

The full time whistle ensured Marlow would close the game out with a long overdue three points. Mark Bartley will be delighted with how his side managed to keep their discipline throughout the full ninety minutes as the team look to carry the momentum into next week's away match against Northwood.

“You can’t knock three points and a clean sheet at home.”