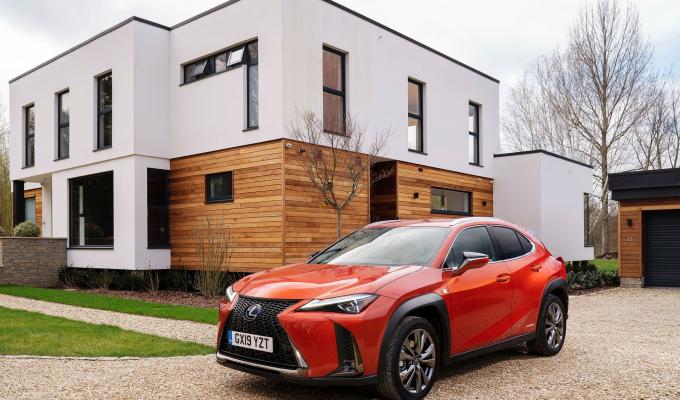 You get a different mindset when you drive a hybrid such as the Lexus UX, the company’s “urban explorer” low level SUV.

It’s all about the fascinating display that informs you know how the car is being powered – purely by the petrol motor, a combination of petrol and electric juice stored in the battery pack, or just electric when the speed is low enough and there’s sufficient life in the battery.

It’s this latter bit that sets the challenge. The battery icon is divided into cells and the target is to fill every cell. Careful driving and gentle braking both help and each of us tries to outdo the other by turning the final cell blue. It’s hard to achieve and seldom happens but there’s a glow of satisfaction that more than outshines the dashboard display when it does.

And it appears it’s not just us who have this contest. We drove up to the Cotswolds in the UX and stopped off at the Cotswold Food Store near Stow-on-the-Wold, where we often chat to owner Bernard (his wife, Joan, is normally too busy for long conversations but Bernard is a smooth front-of-house operator and mans the counter in the diet-busting deli). It was one of these chats that revealed what we do for a living and Bernard likes his cars. Back in the summer we had an email exchange and it was obvious that what he needed was a Lexus or Toyota SUV hybrid.

When we rocked up in the UX, he beamingly told us that he and Joan had been driving their pre-owned Lexus RX450h for a month and were really pleased, not only with the car but also the dealer experience. Since its launch here 30 years ago, Lexus has expected its dealers to provide somewhere extra special for customers and it seems this polished approach has not diminished even when the purchased car is not a new one.

Anyway, Bernard and Joan run the same sort of contest over the battery display and get about 35 mpg from their car, although so far it has only travelled shortish trips. That compares very favourably with the 46 mpg we averaged in the smaller and less powerful UX, which gets 181 bhp from the petrol / electric motive combination. It was disappointing as we got more from the previous week’s Toyota RAV4 hybrid, a chunkier SUV with a 2.5 litre petrol engine – the UX has a two litre unit.

Our UX 250h F Sport test car was a bit of fun to drive on a longer trip but was better suited to smooth main road black top than to the back lanes we needed to use on a diversion route around an emergency road closure. Intimate knowledge of the Cotswolds helped find the route but couldn’t do anything about the ride.

Long journeys expose one of the shortcomings of the UX. At just 43 litres (around 9.5 gallons) the fuel tank is hardly generous. It might be fine for urban life, where there’s a plentiful supply of fuel, but at 46 mpg the range is only a safe 375 miles which we would find frustrating on our regular Scottish jaunts because of the extra fuel stop it would force. Touring in remote areas would also cause range anxiety of the type normally associated with battery-driven cars.

The UX is best regarded as an occasional four seater when it comes to carrying adults. Anything other than this requires a different Lexus selection but there is a wide range to choose from. Rear legroom is the limiting factor, especially if the driver is tall and needs the seat well back for comfort. The seats themselves are cosseting and the bright red of the leather facings made the test car feel warm and inviting.

The swooping roofline brings a rear load area less practical than some competitors but buying this Lexus is as much about style as anything else. Style is something it has in spades, although the jury’s out on the hideous black wheelarch mouldings! With its carved and curved lines sculpting the body sides and that deep front grille there’s plenty else to capture the eye.