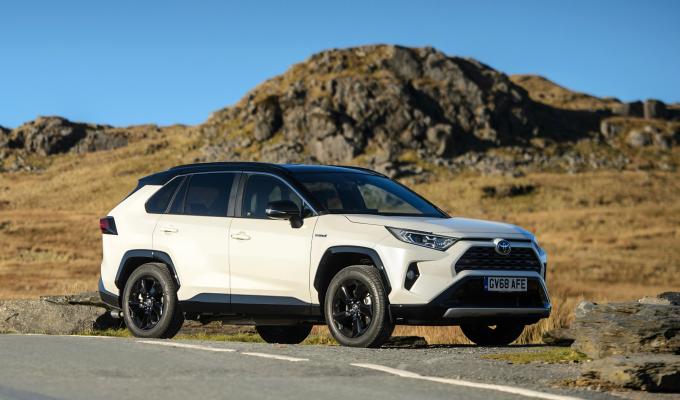 When Japanese cars arrived on the UK market just over 50 years ago, they stood out because of both their high equipment levels and sometimes garish decoration.

British drivers who had been taught that even a heater was an extra cost luxury suddenly found makers who would provide one as part of the package, along with radios and other finer touches, although the cars were initially more prone to the ravages of tinworm.

As time progressed Japanese cars became longer lasting and less distinctive as the body decoration was deleted for a good reason – all those clips and fittings to keep it in place harboured rust. Now, thankfully, Japanese cars in the UK are back to being both distinctive and market-leading in their mechanical packages, too.

Just look at Toyota, the mainstream driver of hybrid cars for 20 years. And a star among that selection of hybrids is the RAV4, the new fifth generation of the Recreational Activity Vehicle that the company initiated with the first RAV4 back in 1994. It’s not quite as poke-in-the-eye as the company’s C-HR hybrid but it could hardly be described as bland compared with its immediate predecessors.

This latest generation packs a 2.5 litre petrol engine to couple with its hybrid power pack. The result is a total 215 bhp power output that brings virtually the same 0-62 mph time as the Jaguar E-Pace (8.4 seconds Toyota, 8.2 seconds Jaguar) although with its 112 mph top speed the RAV4 would be left some way behind by a flat-out 134 mph Jag. It’s academic whether that makes any discernible difference for UK drivers; hit top speed in either on any UK road and you won’t be driving for at least six months unless you have an imaginative lawyer.

What sets the 215 bhp Toyota apart from the 200 bhp Jaguar is both its cleaner running and better fuel consumption. Where emissions are concerned, the Toyota puffs out 105 g / km of CO2 while the Jaguar produces 182 g / km. The good news is that with no diesel being burned there’s no NOx to worry about.

The Toyota also goes half as far again as the Jag on a gallon of unleaded and, if you’re on a long trip, that’s quite possibly a means to avoiding a fuel stop and much time and money wasting, the latter if you pay the rip-off prices at motorway filling stations. They are not necessary – truck drivers pay even less than supermarket prices while using motorways if they have a fuel card, just as we used to do when we had cards to fuel several cars and a campervan more economically. If they can have a 40p discount on each litre, why should ordinary motorists pay up to a 20p penalty when compared to normal forecourt prices (and why can’t petrol be bought on fuel cards at a discount, too)?

The Toyota’s average is bang on the figures under the latest WLTP test regime which now produces believable results. It’s a shame the Dynamic trim test car was only two wheel drive; while a hybrid is not much cop off road at least 4x4 on-road gives some security in tricky conditions although that’s less so with hybrids that don’t have a mechanical link between the front and rear wheels if both sets are driven.

Even with all the equipment that comes with Dynamic trim, the test RAV4 was reasonably priced at £34,705 and, of course, you can buy a RAV4 for far less. It had an electric driver’s seat but the passenger seat had only manual adjustment, not really forgivable at this money, but that apart there was little on which to fault it. With its obsidian blue paint for much of the body, it took a bright day to realise that the roof and much of its pillars were black, making the effort a bit of a waste. The contrast, of course, is far greater with a light main body colour.

Inside, the RAV4 has oodles of space (an impressive 1,690 litres with the seats folded and the 4x4 model will also tow 1.65 tonnes, double the two wheel drive’s capacity) while ride quality is decent thanks to 60 section tyres on 18 inch wheels. It’s cosseting and a delightful place in which to relax while munching miles.