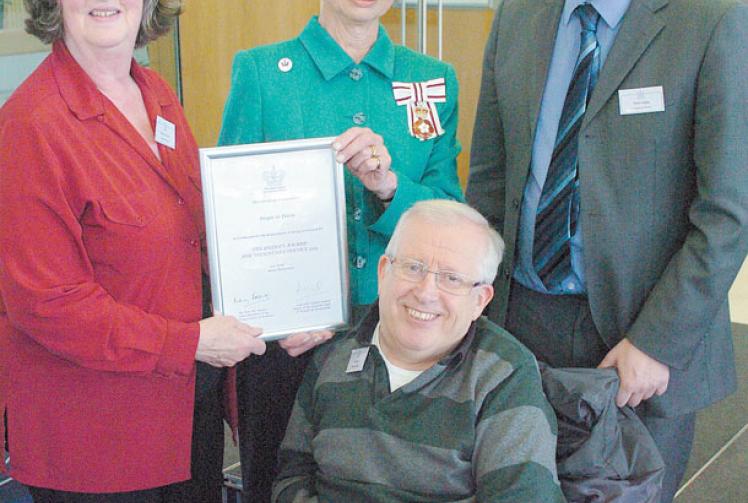 Charitable groups from across Berkshire were recognised for their contribution in the community last week. A reception was help at Ascot Racecourse for 20 charities which have been nominated for the prestigious Queen's Award for Voluntary Service.

The annual award recognises the work carried out by charities and volunteer-run organisations, nominated by members of the public who have either benefited from their work or seen the positive effect on their community.

Representatives from each charity gathered at the racecourse on Tuesday to receive a certificate from the Hon Mary Bayliss, Lord Lieutenant of the Royal County of Berkshire. She said: "You help to improve the lives of those who might otherwise slip through the net and who I am quite sure are deeply grateful and thankful for the help that you provide."

The winners will be announced on June 2, the anniversary of the Queen's coronation.

Royal Borough of Windsor and Maidenhead

People to Places provides specialist accessible transport for people in Maidenhead and Windsor with disabilities or mobility issues. The charity, based in Vanwall Road, was put forward for the award by the mayor, Cllr Asghar Majeed. General manager Peter Haley said it was a really nice gesture and very exciting for the organisation. "It's fantastic just to be nominated as there are so many groups working very hard across the Royal Borough," he said.

The Rivertime Boat Trust operates a specially commissioned boat for use by disabled and disadvantaged people in the Thames Valley. Founder Simon Davis, of Bray, said: "We're absolutely delighted. We have 45 volunteers who work very hard and take the boat out with disabled and disadvantaged people." He said the charity has given 6,000 people a ride on the boat so far and said the skippers and crew do a 'wonderful job'.

Wraysbury and Horton Age Concern promotes the well being of all older people in Horton and Wraysbury to help them have a fulfilling life. It meets twice weekly on Tuesday and Thursdays in Wraysbury Village Hall. Jill Hopkins who went to the Ascot reception with fellow volunteer Jennie Francis said: "It was very nice. It is a beautiful building at Ascot. The Lord Lieutenant gave us our certificate and said a few words. We all enjoyed tea and cakes."

Slough Refugee Support in Bath Road is a charity which works with refugees and asylum seekers in the area. Emmanuel Munyambuga, project manager, said: "This is a testimony to the impact of the job we do and the difference we make."

Slough Homeless Our Concern (SHOC) is based at Serena Hall in Burlington Avenue. It aims to provide a comprehensive package of services to tackle homelessness and social exclusion, within a safe and friendly environment. Robert Layman, the day centre manager, said: "It is absolutely wonderful to be nominated."

Slough Child Contact Centre and Church Street Child Contact Centre provide a neutral meeting place for children from separated families to meet parents who do not live with them. They are based at St Andrew's Shared Church in Washington Drive and St Mary's Church in Church Street, and a third centre in Maidenhead shares the nomination. A spokeswoman said they were 'thrilled' to have their work recognised.

Destiny Support CIC, based at Thames Valley Community Centre, The Green, Slough, offers support to 'hard to reach' groups in the community. It was the brainchild of Sue Njuguna who set it up to provide independent living support services to a wide range of people. Sue said: "We're unbelievably excited to be nominated and most of all it's the acknowledgement for the work that we're doing." The charity prides itself on being an 'open organisation' and helping people from all walks of life with a variety of problems.

Thames Valley Positive Support, based in Slough and Reading, is a sexual health charity which supports people affected by HIV throughout Berkshire. As well as holding drop-in centres twice a week it offers specialised support workers, counselling and workshops. Director Sarah Macadam said: "It's amazing, we're over the moon, I nearly cried when I heard about the nomination. There's so much doom and gloom in the charitable sector with funding cuts, that when you get good news like that it makes it everything worth while."

Daisy's Dream supports children and their families affected by both life-threatening illness and bereavement. The Twyford-based charity counsels children who have lost family members throughout Berkshire with help including telephone support, home and school visits and group events. Fundraising manager Vickie Randall said: "It's absolutely fantastic that we have been nominated and we're really delighted to be recognised. Our volunteers are really committed and dedicated to the work that they do and we really appreciate their support."

See our photos from the nomination day below.