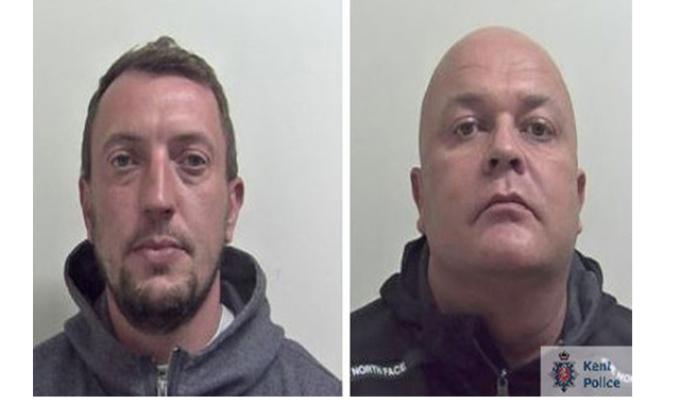 Drug couriers who tried to hide cocaine worth £2million in the back of a van during a drug deal in Maidenhead have been jailed for 11 years each.

Paul Worthington was seen passing a laundry style bag to Roy Basson during a drug deal in the town on May 20 this year.

Basson then disappeared into the back of his Citroen Berlingo van and as officers approached him, he attempted to hide 20 blocks of cocaine inside a specially built compartment (below).

The drugs had an estimated street value of between £1million and £2million, Kent Police said.

Both men were arrested by officers and police also seized two mobile phones and a notepad with postcodes written down.

On Thursday, Worthington, 41, of Bishops Way, Pooley Green, Surrey, and Basson, 39, of Stonehouse Road, Sevenoaks, were sentenced after they admitted a charge of conspiracy to supply cocaine.

Basson was also charged with acquiring criminal property, which was ordered to lie on file. A criminal charge is allowed to lie on file when the judge agrees that there is enough evidence for a case to be made, but that it is not in the public interest for prosecution to proceed.

The drug couriers were each jailed for 11 years at Maidstone Crown Court, and the judge also passed a forfeiture and destruction order for the drugs, cash and van.

Investigating officer Detective Constable Stuart Clayton said: "This was a significant drug find which involved a vehicle being professionally modified in order to hide a large amount of cocaine.

"We work hard across the county to target drug dealers in order to stop the sale and distribution of drugs within Kent and Medway and this is a good example of the cross-border work we carry out.

"They may not have been drug dealers themselves but by acting as couriers they are just as accountable, and their sentences reflect this criminality."