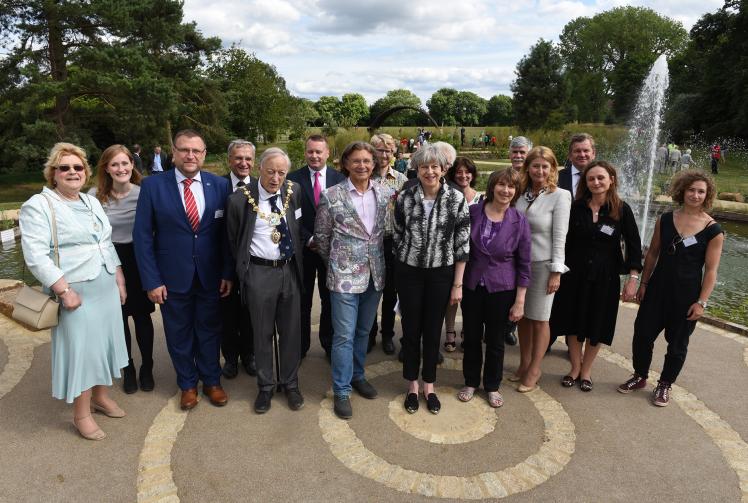 Prime Minister Theresa May joined Sir Nicholas Winton's family and guests for the official opening of the garden.

A 'wonderful, spiritual' space created in memory of Sir Nicholas Winton was opened by Prime Minister Theresa May today in a ceremony attended by members of his family.

The Maidenhead MP and Sir Nicholas' children Barbara and Nick Junior gave speeches at the official launch of the Sir Nicholas Winton Memorial Garden in Oaken Grove Park, which was attended by guests and members of the public.

It was created in honour of the Maidenhead resident, who helped arrange for hundreds of children to be brought to safety on what later became known as the Czech Kindertransport, on the eve of the Second World War.

The garden features an ornamental pond and fountain, wild flowers and stones bearing quotes from Sir Nicholas, who died in 2015 at the age of 106.

The Prime Minister was given a tour of the garden, where she met dignitaries, schoolchildren and members of Pinkneys Green Scouts, before the official opening ceremony.

Sir Nicholas' daughter Barbara said: "I feel that this garden is a wonderful fusion of the major aspects of my father's life. He loved his garden and I'm sure would be thrilled that a garden is his memorial."

His son, Nick Winton Junior, added: "I think that it's a wonderful space, almost spiritual."

He said the best thing about the garden is it is free for people to visit, and thanked the Royal Borough for creating it in his father's name.

The Prime Minister said: "When I first came to Maidenhead as the newly elected member of parliament, people used to talk to me about Nicky Winton and I have to confess, I didn't know the story. But I soon met Sir Nicholas, and met a man who had given his life in the pursuit of improving the life of others, but who of course crucially, in his younger years, had not only improved the life of others, but had literally saved the lives of hundreds of children."

She added: "I think it is wonderful that we have this memorial garden here in Maidenhead for people to come to. It will be an inspiration to people too, to young and old, to come here and think of the life of a man who gave so much to others, and I hope people will take inspiration themselves to go on and do good too, in their local community and elsewhere.

"In Sir Nicholas Winton we saw someone who devoted his whole life, day in and day out, to active goodness. Let us all take inspiration from that and aim to do that too in our lives."

The council worked closely with Sir Nicholas' family to create a fitting memorial for him.

Oaken Grove was chosen as the location because he lived nearby in Pinkneys Green.