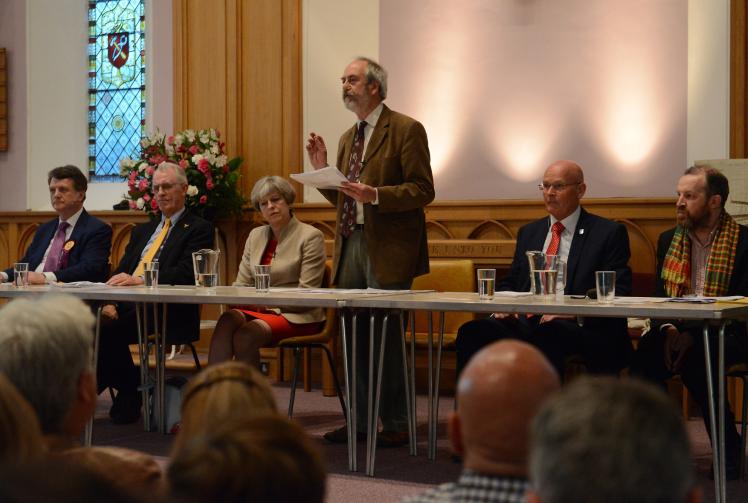 The Prime Minister Theresa May faced heckling over her plans to repeal the fox hunting ban at last night’s general election hustings in Maidenhead.

Organisers, Churches Together in Maidenhead, decided to stop eight other candidates including the self-proclaimed ‘intergalactic space lord’ Lord Buckethead from speaking as they did not have a seat in the last government.

While discussing her plans for bio-diversity in Maidenhead, members of the Hunt Saboteurs Association accused Mrs May of ignoring the opinions of 90 per cent of the population over fox hunting.

The Prime Minister replied: “You’re either for fox hunting or you’re against it and some people feel passionately on both sides of this.

“I was brought up in the countryside and yes, I do support fox hunting.

“In the Conservative manifesto there would be a free vote in parliament and it would not be whipped by party.”

Audience members also grilled the panel about their plans to address social care funding concerns in the UK.

Labour candidate Pat McDonald said: “We have an NHS and we need to find a national solution to social care.

“You can’t say to people just because you’re unfortunate enough to get a long-term illness when you’re older, now all the assets you possess are fair game.”

Tony Hill, of the Liberal Democrats, added: “This is a completely wrong road for us to go down how somehow we won’t share the costs of the inevitable illness of some of us.”

Mrs May said her party still planned to cap the amount of money people had to pay for social care but warned ‘the system will collapse’ if no long-term solution is found.

The government’s commitment to bringing in 20,000 Syrian refugees by 2020 also came under the spotlight, with the Conservative candidate telling an audience member she planned to continue with the scheme.

UKIP’s Gerard Batten said it was ‘unsustainable’ to keep bringing people into the country.

On Heathrow, the Prime Minister maintained the government’s stance on the proposed third runway at Heathrow and said some of the people of Maidenhead ‘owed their livelihoods’ to the airport.

The evening rounded off with a discussion on the government’s treatment of the gypsy population with an audience member accusing the Conservatives of omitting race issues from its manifesto.

Mrs May called for more facilities to help traveller communities.