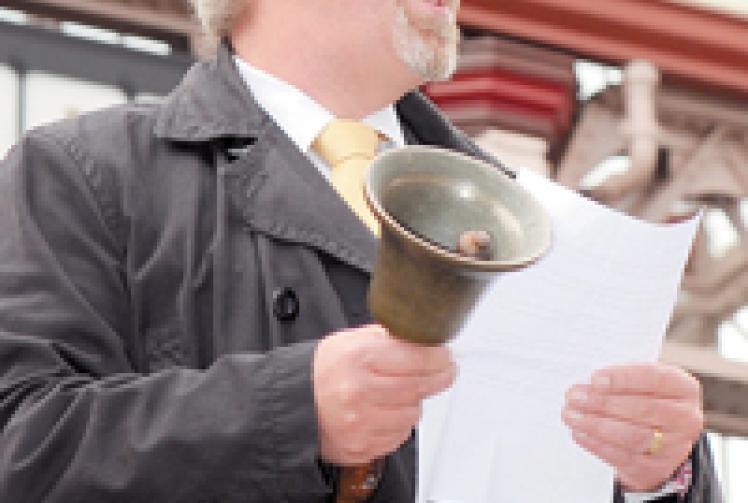 Chris Brown is the new town crier for Maidenhead and Windsor.

Chris, of Vale Road in Windsor, was announced as the winner today after impressing judges at Wednesday's 'cry-off.' He is the borough's first town crier in a century.

Chris, who had hoped having a beard would work to his advantage, runs website design company Brown Bear with wife Nicola from their home. He has been phoning friends and family all morning sharing the good news but said it was time to get back down to work as two of his websites need to be made live today.

He is a volunteer at the Windsor and Royal Borough Museum and has a passion for history. He was also a member of the Windsor and Wraybury Archaeology Society before it closed down.

Chris was still shocked this morning when speaking to the Express. He said: "I like talking to people and I often said to colleagues at the museum that what we need is somebody wandering around town and helping people to get around. Everyone only knows about Windsor Castle."

The new white-bearded town crier used to be a tour guide at Wembley Stadium guiding 30,000 around the venue. "It was my first Saturday job and I got used to showing people around and shouting from a young age," he said.

The cat owner made it clear that he is committed to the role, despite the connotations that can be associated with a town crier. "This is not a joke. I think this role is going to be really important for both Windsor and Maidenhead and its history."

Wife Nicola is proud of her husband but fears she will not see him as much. She said: "At first I thought - what is he doing now? But actually I am delighted for him and will be supporting him at events."

Mike Foster, David Pelling and Roy Austin were the other candidates vying for the coveted ceremonial role.