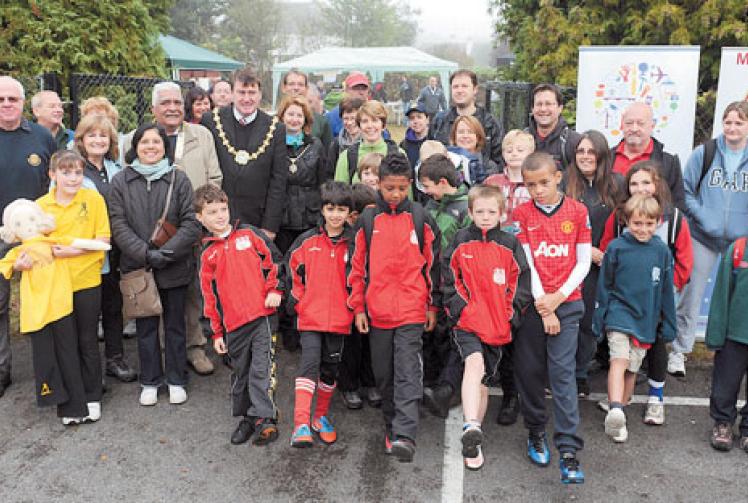 A three-legged dog and a 10-year-old 'veteran' were among the hundreds of determined walkers taking part in this year's Maidenhead Boundary Walk.

The popular 13-mile walk around the old boundary of Maidenhead took place yesterday and became a 14.6 mile hike because high water levels meant there was no ferry crossing at Bray.

Among the starters at Boulters Lock car park in Lower Cookham Road was Zoe Le Carpentier and her three-legged Yorkshire terrier Pelucchi.

The two-year-old 'tripawd' dog and 30-year-old owner have raised more than £500 for Battersea Dogs & Cat Home.

Zoe, from Breadcroft Road, said: "It is the second time I have done the walk, the first was when I was aged four. I am a professional dog walker so Pelucchi is used it."

Despite being aged just 10, Redroofs Theatre School pupil Tegan Harris is a veteran of the walk.

The Malders Lane youngster has been taking part since she was two, and together with dad Tegan Harris raised more than £100 for Rosie's Rainbow Fund this year.

Yesterday's event attracted 424 walkers who raised about £14,000 for 59 different charities.

Graham Brunsden, from the Rotary Club of Maidenhead, is chairman of the Boundary Walk committee.

He said: "It is a great shame the river is up too high and we have had to cancel the ferry crossing but we are thankful for the dry weather."

Maidenhead MP Theresa May joined up for the start before heading to Birmingham for the Conservative Party Conference.

The Home Secretary said: "It is great to see people enjoying walking and raising funds for charity."

Colin and Andrea Macarthur came all the way from Manchester to take part, while Carl Silver and Kayleigh Silver, 14, raised more than £100 for Knowl Hill and Waltham Guides.

See some photos in the slideshow below and don't miss Thursday's Advertiser for more.