In pictures: Boulters to Bray swim

In pictures: Boulters to Bray swim 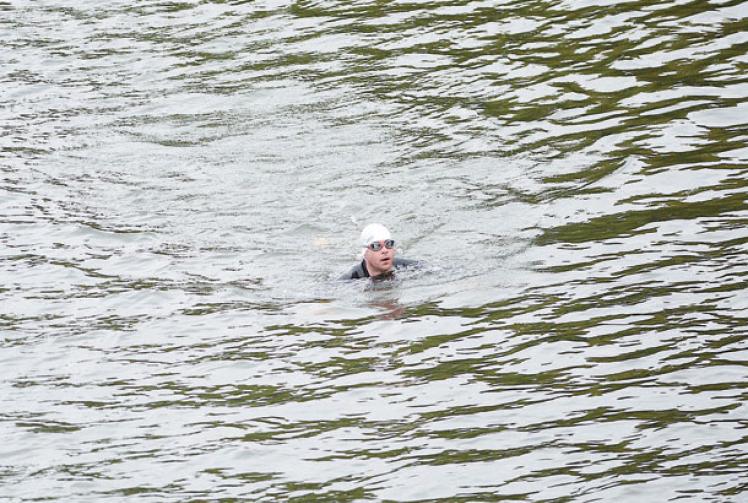 Wet-suited swimmers braved the rain for an early morning race down the Thames.

The Boulters to Bray swim returned for its fourth year since being resurrected in 2011, starting at 6.15am on drizzly Saturday morning.


The 2.8km route stretches downstream from Ray Mill Island to outside the Waterside Inn, Bray.

The race is supported by the Louis Baylis (Maidenhead Advertiser) Charitable Trust.

Winner Richard Stannard, who moved to Maidenhead from Surrey in March, explained that he saw the race advertised and was eager to get involved.

He swam the route in 28 minutes and 28 seconds.

The Great Britain triathlete and former aquathlon world champion has a goal for next year's race, to beat junior Alistair Bingham's 2012 effort of 25.50.

Connie Dean won the junior women's category, clocking a time of 29 minutes and 25 seconds, while Alistair Bingham was again the best of the boys, coming in on 29 minutes and 58 seconds.

The race has roots in the 1800s, when 'The Long Swim' was held every year in the town.

It was resurrected in 2011 and been growing in popularity ever since. This year 145 swimmers completed the route.

Among the pack were Greg Whyte, the sports scientist from Marlow who trained David Walliams for his epic Thames swim, and 1988 Olympic gold medallist Adrian Moorhouse.

Greg said: "'It's the second time I've swum the Boulters to Bray and despite the rain the spirits weren't dampened.

"The excitement of swimming in one of the world's most iconic rivers is always a treat.

"The Boulters to Bray is particularly fun because of the great organisation; the breadth of abilities from beginners to world champions, and of course not forgetting we swim with the flow resulting in fast times."

Adrian, who was racing the route for the first time, explained that he was drawn in by the historical aspect of the race.

He said the wet weather was not a problem, joking that 'if you're stupid enough to swim in the river the rain doesn't matter.'