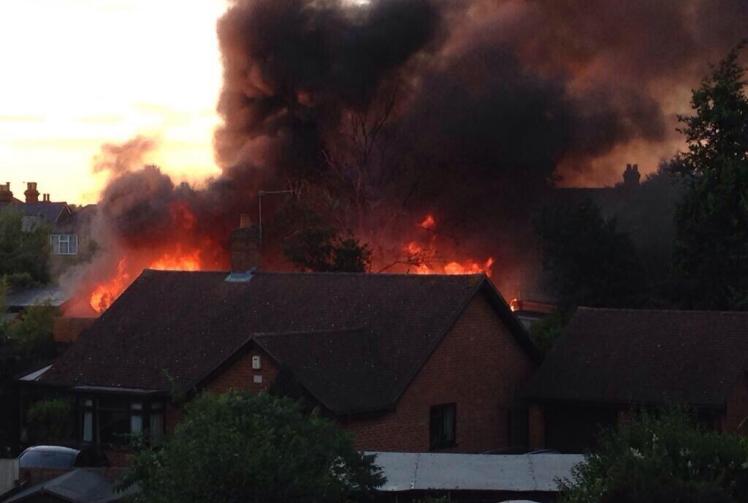 Fire crews have been called to tackle a blaze in Belmont Crescent in Maidenhead.

Four fire engines, a forward command unit and four officers are on scene as it is believed the fire could involve cylinders.

Police have cordoned off the road and the police helicopter is circling overhead.

Are you at the scene? Tweet us your photos @MaidenheadAds

Reporter Simon Meechan is at the scene of the fire.

A neighbour, Maxine Lattimer, told him the blaze looked like a very large bonfire, then she saw a tree set alight. "Our whole back garden is covered in ash," she said, "It burnt a hole on our trampoline.

"[The flames] went right up through the tree."

We were sent this tweet earlier which shows the smoke which could be seen from about two miles away from the fire:

@MaidenheadAds This is about 2 miles away and I can hear many sirens heading to the west of town #maidenhead pic.twitter.com/2qFWDuT9Hx

Twitter user @sophieshields_ sent us these photos from the scene:

This tweet from Matthew Blacknell shows the emergency services in Belmont Crescent earlier:


@RBFRSofficial are putting in a great shift at Belmont Crescent pic.twitter.com/x0MQFnHg3x

The fire service has tweeted an update on the situation:

The incident in Maidenhead is ongoing with our crews working with @TVP_Maidenhead and @SCAS999 to bring the situation under control.

At approximately 9pm, fire crews in Maidenhead received a call about a small shed fire at a property in Belmont Crescent.

However on their arrival it was apparent that was not the case and that two other sheds were involved as well.

Watch manager Steve Hogg said: “At that moment in time we were dealing with a well developed and rapidly moving fire which we struggled to contain as it was quite a big fire.

“Other residents were concerned about the fire spreading to their home so we had to protect them and prevent further damage.”

Four fire engines were used to tackle to blaze; two from Maidenhead, one from Slough and one from Windsor.

The fire crews left the scene at 1.30am.

At present it is not know how the fire started but an investigation is underway.

Sinead Kiddle, who lives in Belmont Crescent, said: "It was really scary.

"I have got a canister of petol in my shed and I was thinking 'Oh my God that's going to go up'.

"Thankfully nobody was hurt and what an amazing job the firefighters did."