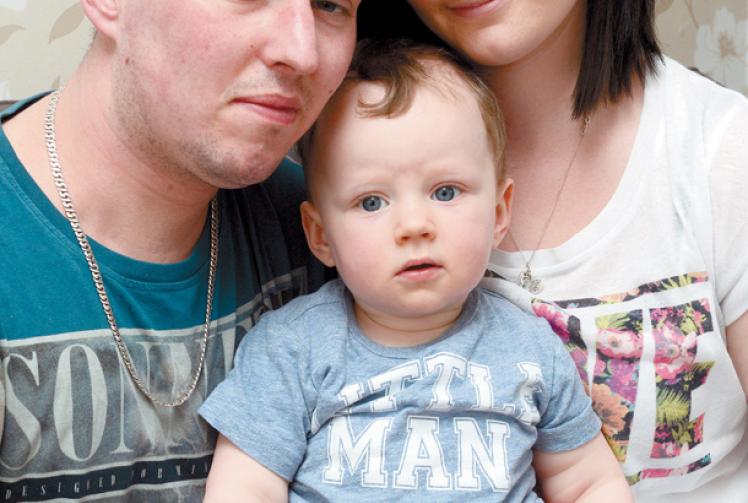 Determined family and friends have embarked on a mission to fund pioneering cancer treatment that could save the life of a young dad.

Matt Rackley, 24, who lives in Cookham with his partner Hollie and their one-year-old son Freddie, was diagnosed with a brain tumour in April 2012.

At the time doctors gave him just two years to live.

The tumour is rooted to his brain stem and cannot be removed through surgery.

But clinics in America now offer radiation treatment, not available on the NHS, called proton therapy which could save Matt's life.

The news has sparked a fundraising drive, headed by Matt's younger brother Chris, to raise the £150,000 cost.

Matt’s family is also supported by the Kids 'n' Cancer charity in its efforts to raise the money.

Chris spent Saturday collecting donations at the Let's Rock The Moor festival in Cookham and finished the day with £1,500.

The 22-year-old, from Cox Green, is also organising a charity day and has recruited a group to run a Tough Mudder endurance race in October.

"There's been a lot of blood, sweat and tears these last few months and it's going to take a hell of a lot more to get my brother back to himself, but I'm willing to give it,” he said.

"These thing don't just go away. Without treatment my brother won't be here to look after that beautiful little boy and there is no way I'm going to let that happen."

Matt, a self-employed electrician, underwent a risky biopsy to find out more about his tumour at John Radcliffe Hospital in Oxford in March.

"On the morning of the biopsy I was told it was quite serious and I might not come back from it. But at the time it was the right thing to do," said Matt.

It confirmed the tumour cannot be removed through surgery, and left proton therapy as one of the family’s last options.

Despite frequent headaches, sickness, blurred vision and a difficulty sleeping, Matt has fought bravely, only giving up work in January.

He was even reluctant to call an ambulance after suffering a chest infection which nearly killed him.

"I do not want sympathy. I've never been like that," said the former Cox Green School pupil.

Kids 'n' Cancer charity founder Mike Hyman is backing Matt due to his young age and because he is the father of a baby boy.

He said: "It’s a dire situation for him if he doesn’t get that treatment."