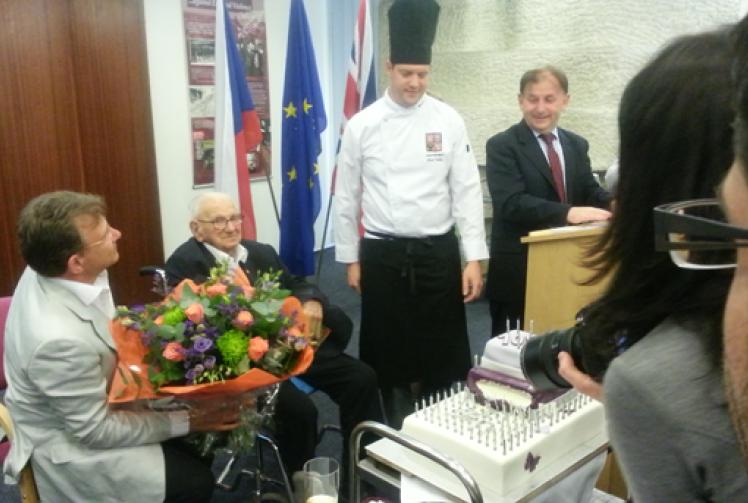 THE president of the Czech Republic has announced the man known as 'The British Schindler' will be bestowed with the nation's highest honour.

Sir Nicholas Winton, who lives in Pinkneys Green, will be awarded the Order of the White Lion after he saved 669 Jewish children's lives by smuggling them out of Nazi-occupied Czechoslovakia just before the Second World War began in 1939.

The announcement was made during a reception attended by Sir Nicholas at the Czech Embassy in London on Monday (May19).

The reception was held to celebrate 105th birthday of Sir Nicholas and attended by about 60 guests.

Glasses were also raised at the event to celebrate the launch of Barbara Winton’s ‘If It’s Not Impossible...The Life of Nicholas Winton', a biography written by his daughter, Barbara Winton.

A speech was given by the Czech ambassador Michael Zantovsky who read letters from both the nation's  prime minister, Bohuslav Sobotka, and the president, Milos Zeman.

Mr Zeman wrote: "You gave them the greatest gift you could give them: the chance to live."

The gathered guests included children rescued in 1939 and their relatives.

Lord Alf Dubs remembers his mother putting him on one of the Schindler 'Kindertransport' trains when he was six-years-old.

Sir Nicholas was determined that he should stand to deliver a speech where he thanked everyone for coming.

His daughter spent four years interviewing her father and trawling through his letters and diary entries in order to create the biographical record of his life.

She thanked him for his time in helping her put the book together before handing him a copy of the biography as a birthday present.

In a speech she said: "Where possible I put his own words into this because it feels so live to the times and he lived through such extraordinary times, as did most of you.”

The name of the book was inspired by Sir Nicholas' motto: "If something is not impossible, then there must be a way to do it."

Copies of the biography are available at Maidenhead Heritage Centre in Park Street.