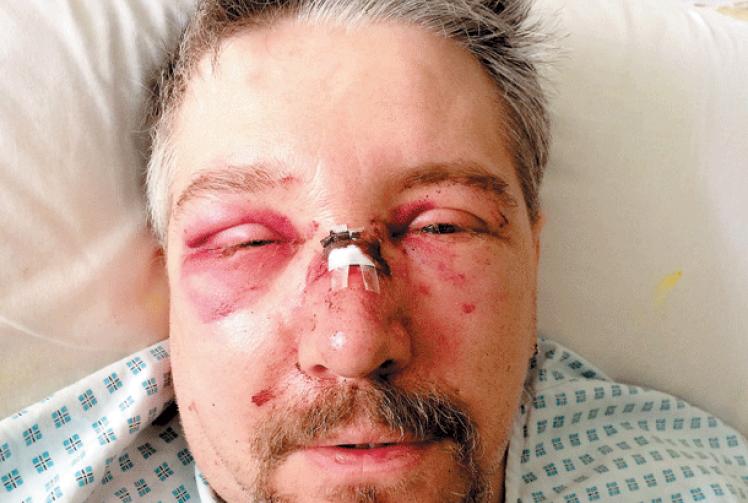 A motorcyclist left hospitalised after a freak accident with a van has branded the driver who fled the scene a 'gutless coward'.

Nick Worth, 46, was left with a broken nose and glass in his eyes when a piece of wood hanging out from the back of a passing van smashed into his visor in Gardner Road.

Nick Worth was taken to Wexham Park Hospital

As Nick lay at the side of the road awaiting medical attention, witnesses told him the panicked driver pulled over further down the road before getting back in the vehicle and fleeing.

Nick had headed out for a quick ride at about 2.35pm on Wednesday, April 16, after spending the afternoon polishing his Triumph Rocket III motorbike.

Having left his house in Radcot Close, the father-of-three headed down Gardner Road when the wood struck him across the face, leaving him to blindly scramble to the side of the road.

Emergency services in Gardner Road after the accident. Picture by Adam Batstone.

Police and ambulance were quickly on the scene and he was taken to Wexham Park Hospital, where he was kept overnight as they removed 16 pieces of glass from his eyes and fixed his nose with glue.

He said countless people had come forward to help him as he lay by the road but was not fully aware what was going on at the time.

"I somehow managed to get my lid (helmet) and my glasses off but there was tonnes and tonnes of blood pouring out my nose," said Nick. "I didn't lose consciousness but came very close.

"It was such an horrific situation to be in but it was my integral sun-visor that saved me.

"My greatest feeling about it is anger and the fact that this guy decided to walk away.

"It could have been so easily dealt with. He did this to me and then thought it was alright just to drive away.

"If this guy hadn't been such a gutless coward he would have seen it was just an insurance job.

"It was an accident, I would have forgiven him there and then, but it's the fact that he was so gutless.

"If the guy does have a backbone I hope that he will think 'the guy isn't dead or disabled, I will hold my hands up'.

"Somebody's going to know who this clown is."

He also believes a cyclist would have died if they had been hit by the wood.

Nick's three children Faye, 23, Adam, 21 and Douglas, 15, started a Facebook campaign to find the man responsible and their proud dad said their support had been 'tremendous.'

"They have been amazing," he said.

"I lost my wife six months ago now so we are all we have.

"They are what I live for."

Police are investigating. If you can help call 101.