UPDATE: Owner of stolen tortoises pleas for their safe return

UPDATE: Owner of stolen tortoises pleas for their safe return 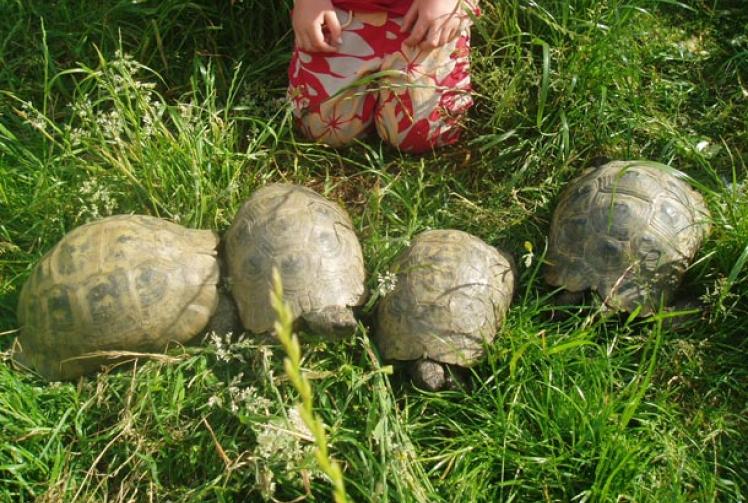 The owner of four tortoises that were stolen from their home in Knowl Hill has made a plea for them to be returned.

Esme, Norah, Henrietta and Gertrude were taken from an unlocked shed at a property in Bath Road, along with an infra-red heat lamp, a hedge trimmer and a chainsaw.

Owner Richard Best, who works as a vet in Winchester, is desperate for his beloved pets to be returned safely.

"They are just part of our family," said he said.

"I was gardening until it got dark and when I put the hedge trimmer away they were all tucked up in bed with their heat lamp on."

When he went to check the animals later that night, he thought the heat lamp had gone out, but then realised it had been stolen along with the tortoises and the garden tools.

The spur-thighed tortoises, which are believed to be in their 80s, were all adopted by Richard and his wife, Louise, a vet at The Pines Veterinary Clinic in Bath Road, and all have their own story.

Esme, who has a fungal infection on her shell, came to the couple 23 years ago after becoming depressed when she woke up from hibernation.

"My wife spent hours and hours with her in our flat in front of the fire encouraging her to eat," said Richard.

The vets took in Norah after her owner became worried that her dog, who kept knocking the tortoise over, would injure it.

Henrietta, who only has one eye, arrived when her owners emigrated to Australia and Gertrude moved in after her previous owner's arthritis meant she struggled to look after her.

John Hayward, co-ordinator of the National Theft Register, said: "It is not the monetary value that is of concern, but the actual welfare of the tortoises because whoever has stolen them will not know their feeding habits and necessary diet."

He added that illegal tortoise trading is considered to be a 'serious criminal offence', that carries a jail term upwards of five years.

The tortoises were taken between 7pm on Monday and 1am on Tuesday.