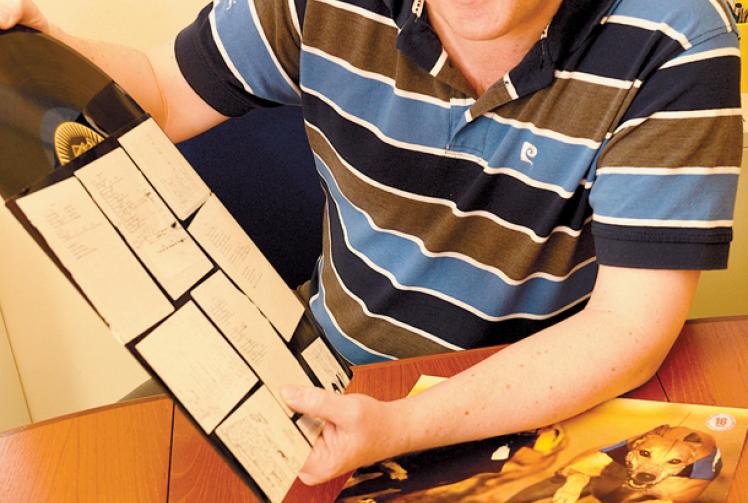 Jeff Lloyd plays host to The Vinyl Frontier once a month at Norden Farm Centre for the Arts. The popular evenings involve playing a vinyl record from start to finish, with anecdotes, trivia and videos threaded in between. Reporter Luke Matthews went along to Definitely Maybe by Oasis vs Parklife by Blur to see what it is all about.

The concept for The Vinyl Frontier is a little strange; an audience sit in a room while a man plays a vinyl album from start to finish. But somehow it works.

There is no doubt that the series of evenings are for the music enthusiast.

It does exactly what it says on the tin. You sit in a room and listen to music, but that opportunity is a rare one.

Unless you find the time and money to see it live, music has become background noise for other things.

Distractions push sound to the back of consciousness – like reading a book and realising at the bottom of a page your eyes have read the words but your brain hasn't.

The Vinyl Frontier affords you time to sit and absorb it.

For me, music stripped down to the bare bones like Bon Iver, Ben Howard and James Vincent McMorrow is great because of how raw it is.

Vinyl magnifies that, with the imperfections in the scratches and jumps exposing the nuts of bolts of music how it should be heard.

It wouldn't quite work if it was a sound produced on a computer with an auto-tuned singer played through an iPod dock.

Creator Jeff Lloyd begins with a brief history of the bands, with anecdotes and facts thrown in between tracks, but with a precise balance which doesn't break the flow of listening to an album as a singular piece of music.

As Definitely Maybe kicked in on a sound system which is worth more than my house, I realised I hadn't heard the album in full since I was about 12.

Oasis Vs Blur isn't much of a contest in my head. If someone put on a Blur album for me to listen to at home, I would have found something better to do, like watch paint dry or cut off my own ear with a hack saw.

But with no choice but to sit and listen, a handful of songs began to grow on me. It just turned out the big hits I had been exposed to, like 'Girls and Boys', really aren't for me.

Although it is a sociable evening, it's also a theatre of music.

Jeff engages the audience and encourages participation but as soon as the needle touches down, the music picks-up where the laughter drops off.

A vote at the beginning and end left Oasis as the last men standing, with Jeff giving away the Blur Parklife vinyl and a collection of Oasis singles at the close.

The host, a financial advisor by day, would usually have handed over both the albums featured on the night, but Definitely Maybe cost him more than £50 and goes for three-figures on eBay, so the choice was simple.

Friday's battle was the 10th instalment of The Vinyl Frontier at Norden Farm Centre for the Arts, with the next showcasing The Beatles' Revolver on Friday, March 21.

The evenings offer a chance to rediscover old favourites or find new ones in good company.

It's a strange concept but a pure one that taps into a night out that should never have been left behind. Listening to music the way it was intended.