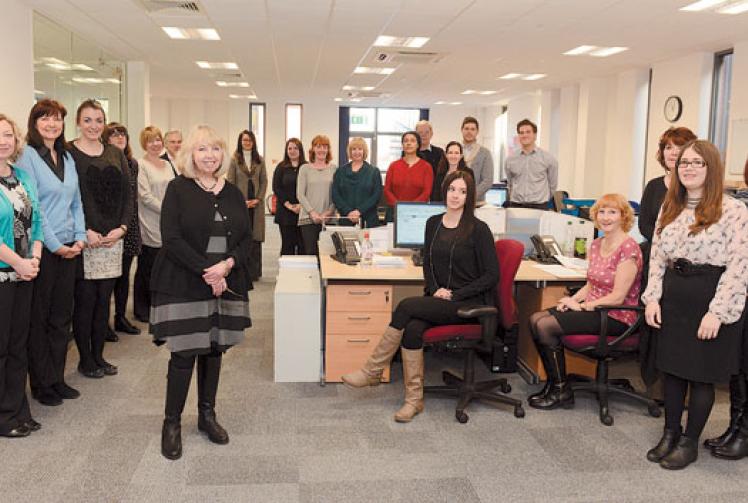 A charity which started life as an advert in the Maidenhead Advertiser a little over a decade ago now offers support to thousands of people - and is still growing.

The National Rheumatoid Arthritis Society (NRAS) has just moved into bigger and better offices in Gardner Road as it looks to take on more staff and offer a better service for people with rheumatoid arthritis (RA).

It now has more than 4,500 members, and has helped to dramatically improve awareness and treatment of RA since it was formed in 2001 by Maidenhead resident Ailsa Bosworth.

The condition is commonly confused with osteoarthritis, often associated with aging, but is a painful and disabling auto-immune disease affecting 690,000 adults in the UK.

"People are not aware of it and don't understand what it is," said Ailsa.

"You could lose your job quite quickly and your family and partner are all impacted."

Ailsa, who has had the condition for more than 30 years, began her work after trialing a new type of treatment in the late 90s which dramatically improved her symptoms but was not available after the trial.

She had to fight for months to be put back on the drug, and, with the backing of rheumatology expert Professor Gabriel Panayi, decided an organisation was needed to research, support and fight for people with RA.

An advert placed in the Advertiser looking for help forming a society gained just one response, but work began on developing a website and the charity soon began to attract more interest.

"At that stage, I don't think any of us realised what we were about to create," said Ailsa, who remains chief executive of NRAS.

"If you had said to me then where do you think this idea would in 10 or 11 years time I would never have anticipated what has happened."

The charity initially operated out of Ailsa's home in College Avenue, but by 2004 it had grown too large and moved to offices in Westacott Way.

With 24 members of staff on board and four more due to join, NRAS made the move to even larger offices in Gardner Road just before Christmas.

Among a number of projects planned for 2014 is a new service offering support for young people with Juvenile Idiopathic Arthritis (JIA), including a dedicated new web area.

More work on commissioned services and treatments are also planned, along with continued efforts to help people with RA through NRAS services including a helpline, peer-to-peer advice and publications.

A programme of activities for Rheumatoid Arthritis Awareness Week, which takes place from June 16-22, is also being drawn up.

Ailsa said: "Basically we are a one-stop-shop.

"Whatever you want or need, if you are living with RA we can help you."