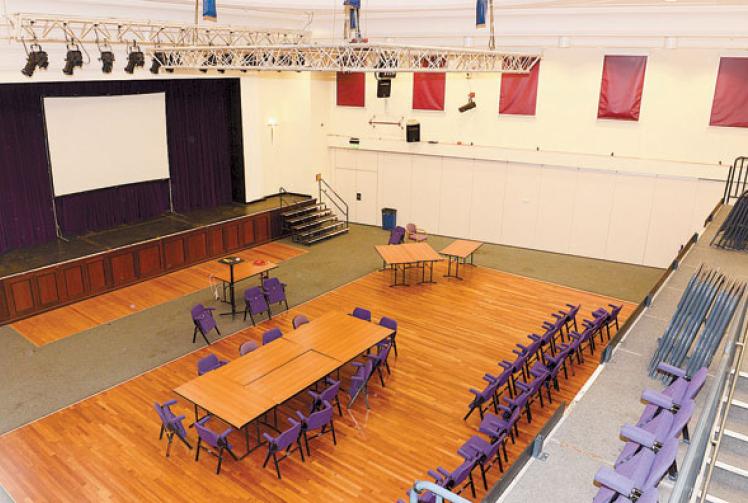 Norden Farm could be at 'significant risk' if plans to transform the Desborough Suite into a multi-purpose community entertainment centre become a reality.


A feasibility study which looked into the possibility of revamping the ‘tired and characterless’ town hall site was published on Friday.

It said the arts needs of the town were already being fulfilled by existing venues, including Norden Farm, and a revamped Desborough Suite could split audiences leading to both ‘failing to meet their potential’.

“A new venue would need to be planned with great care and its effect on existing venues would be likely to be significant,” it added.

The study, carried out by specialist cultural planner DCA, was commissioned by the council in July.

It said an improved Desborough Suite could help drive the regeneration of a ‘cultural quarter’ in the town centre but warned expanding the entertainment offering would rely on drawing existing audiences away from other venues in a market that was already well catered for.

The council says the new-look theatre complex would complement the arts ‘ecology’ of the area and help promote events at other arts venues.

Proposals include a new cafe and bar, better facilities for community groups and exhibitions and an upgraded 400-seat theatre aimed at existing users like amateur dramatics groups.

There would also be a focus on more commercial uses such as hiring out facilities for meetings, social events and conferences.

DCA also carried out a consultation which had 295 responses, some of which raised fears about the effect transforming the Desborough Suite would have on Norden Farm.

The report praised Norden Farm for balancing its books after losing its Arts Council funding but said it was still ‘very vulnerable’. It receives £100,000 a year from the council.

Cllr Claire Stretton (Con, Boyn Hill) the council’s ‘champion of culture for Maidenhead’, said she wanted to see the Desborough Suite ‘recycled’ for the benefit of residents and for it to become a ‘must go’ venue.

“We want to give our residents more choice so whoever you are, you will find something in Maidenhead that appeals to you,” she said.

Cllr Eileen Quick (Con, Clewer East) added: “The Desborough is a much loved space by many residents in the borough but it is under-utilised.

“It is important when the shops close there is a living heart to Maidenhead centre. It is not just ‘the lights go out and there is nothing to do’.”

The council says a new-look Desborough Suite would act as a catalyst for creating a civic and cultural quarter in the town.

Cllr MJ Saunders (Con. Cookham) cabinet member Maidenhead, said the proposals would help with the regeneration of the town centre.

He said: “I am delighted the DCA report shows how a rejuvenated Desborough Suite could help realise the dream for community and commercial engagement.

“With some 1,400 new town centre homes on ‘brown’ redeveloped sites and substantial new offices, there will be a growing audience to attract, inspire and entertain.

“The Desborough offers an almost ready-made solution. The task now is to investigate costed, practical options to give us a cultural focal point for the town centre.”

The DCA report will be discussed at a cabinet meeting, at Maidenhead Town Hall, on Thursday, January 30 and a decision made on whether to allocate £75,000 for an in-depth consultation and more detailed plans to be drawn up.