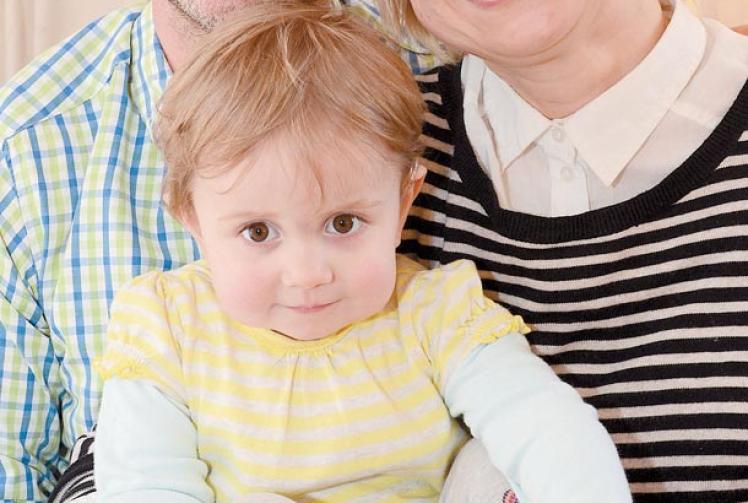 A brave little girl from Maidenhead is breaking new ground as she edges towards recovery from a condition she was given little chance of surviving.

Nina with mum and dad, Graeme and Aga

Baby Nina Warnell has astounded doctors with her response to a pioneering new form of gene therapy which could cure a rare condition which left her without an immune system.

Nina, who turns two in February, has needed constant care and protection throughout her young life due to her condition, known as severe combined immunodeficiency (SCID).

But after being injected with modified cells by doctors at Great Ormond Street Hospital (GOSH) in the summer, the youngster has begun to develop an immune system which has already reached the level of a new-born baby.

"They didn't expect to see any development until about April but her response has defied all the doctors in the best possible way," said dad Graeme.

"It's a total medical breakthrough."

Little Nina is set to undergo further tests at the end of February, but her progress has been so rapid that doctors may be able to declare her cured by May.

It could pave the way for similar treatments for thousands of young children across Europe and allow them to be treated in hospitals close to home rather than travelling to GOSH in London.

"It's almost beyond medicine, this is science," said Graeme. "It's starting to open the doorway for so many different things.

"For the doctors this is like discovering the moon for the first time."

The amount of medication Nina needs to fight infection has already been cut by about 40 per cent, and she is able to enjoy a fuller and more active life at her family's riverside home.

She was effectively placed in quarantine when she was younger, but Graeme, 44, and Nina's mum, Aga, 40, are now able to accept visitors and even take their daughter for walks in the park.

Nina's four-year-old sister, Mia, has been able to start school at Holy Trinity Primary School in Cookham, but will have to be pulled out if any illnesses start to go around.

The family was also able to make the most of Christmas.

"It was really nice and for the first time it just felt like some of the pressure was off.

"I shut my laptop and stopped working and we really spent time together as a family.

"She loves the company of people and, having been in isolation so long, she loves being able to see more people."

Nina has a hearing impairment and her development is still a few months behind that of a child of her age, but Graeme said she was walking, recognising more objects, putting together words and always 'full of happiness'.

He added: "We have gone from facing losing a daughter to having the family back."