Feature: Our reporter Simon Meechan tries his hand at gymnastics

Feature: Our reporter Simon Meechan tries his hand at gymnastics 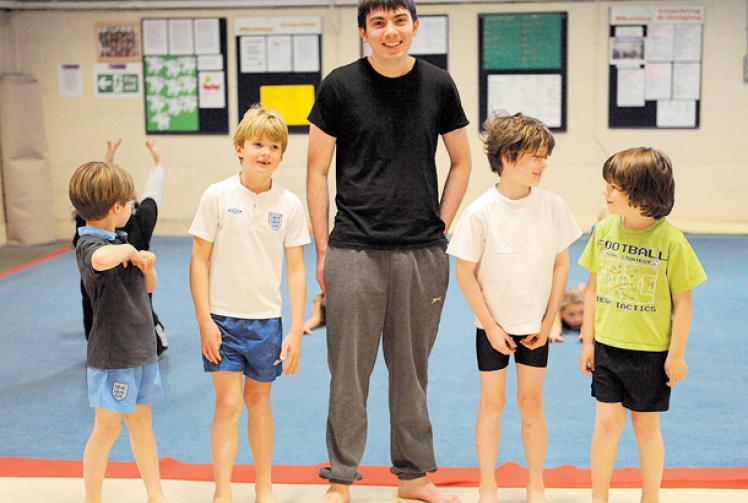 After the success of British gymnastics in both the 2012 Olympics and 2013 World Championships there has been increased interest in the sport from young boys. Advertiser reporter and gymnastics novice Simon Meechan spent a morning training at the Phoenix Gym.

After a Friday evening chasing shadows in a charity football match I was up bright and early for a morning of gymnastics with the youngsters at Phoenix Gym.

The gym at Water Oakley Farm was set up by husband and wife Rose and Richard Butler in 1991. It holds a Saturday morning session for boys aged five to 10.

After a cheery welcome from Rose and introduction to the group, I was thrown straight into action. The session began with some warm-up exercises.

I mistakenly thought this bit would be a case of man against boys. I was quickly put in my place by a group of sub-four footers.

It all started when we were asked to stand up and touch our toes without bending our knees.

I could barely brush my ankles. I looked around and noticed every boy was gracefully reaching their toes, or coming very close. A few even kept repeating the action to prove how easy they find it.

After similar failures in tuck-jumps, crunches and press-ups a pattern emerged. These boys are a lot quicker, stronger and have more stamina than me.

Although competitive,  the boys were all well behaved and showed a clear respect for their coaches, Stephen Palmer and James Walsh, who Rose describes as 'members of the family'.

Both Stephen, 21, and James, 16, have been involved with the club since they were children.

We progressed to circuits on the apparatus - balance beams, rings, parallel bars and ropes.

I watched in awe as the little monkeys swung, span, leaped and ran across the equipment. They made it look so easy.

When it came to my turn I crept, struggled and dragged myself through the circuits. But each time I was vocally encouraged by the boys and found extra energy.

My heart was warmed when I rope-swung over a gap and was cheered by everyone in the group.

Sadly I failed the 'pound challenge' where you dangle under a balance beam before pulling yourself up on to the top of it. A pound coin is the reward for the first time you conquer it.

Again, the aspiring Louis Smiths showed me how it was done.

As the morning came to an end I was then treated to a demonstration from three of the gymnasts.

The youngsters all hung off different parts of the same bar, before swapping positions without falling off.

If the Royal Borough approves plans to develop land at Water Oakley into 44 homes then the Phoenix will be demolished.

But with 600 children heading through its doors every week, the club feels it needs a new gym regardless, so it can expand and accommodate more equipment.

A new, larger gym, would justify running a competitive men’s gymnastics programme, as the necessary extra apparatus could be installed. The lads are certainly keen to do more.

Rose said: "The gym, at present, is not big enough to accommodate the kit needed for any serious men's gymnastics.

"Once we have the space and kit we can then justify the expense of getting one of our coaches qualified in men’s artistic gymnastics.

"We get lots who want to carry on but can’t do much for them."

One of the boys, nine-year-old Tanay Sharma, has special needs and benefits from supplementary one-to-one coaching.

His mum Beena told me that the gym provides an environment where he can enjoy inclusive physical activity with his peers, without the pressures of team sports.

As I left, Richard advised me to take a hot bath because the following morning it 'will feel like you've been on a torture rack'.

He was right. I doubt the kids did though.