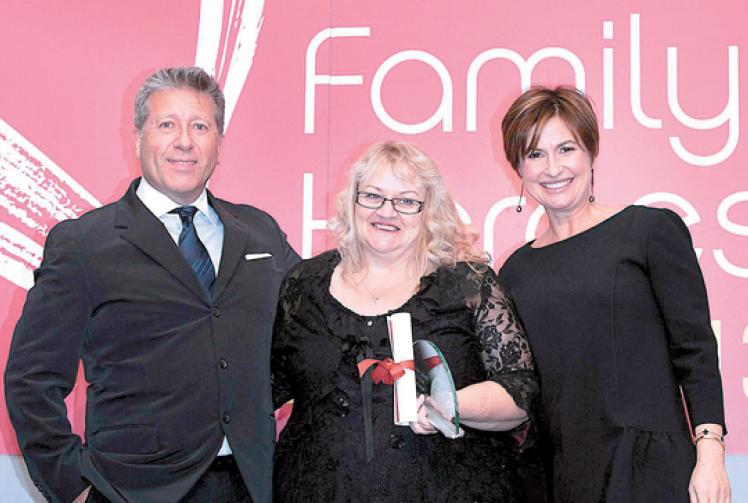 Open Kitchen founder Sue Brett has said she is 'just a mum who likes to feed people' after being crowned Family Hero for the South-east.

The 50-year-old was recognised at the 4Children and Take a Break Magazine UK Awards 2013 in London for her selfless work to improve the lives of others.

Sue set up Open Kitchen in 2010 and the charity has gone from strength-to-strength, regularly providing hot meals and events for disadvantaged people in Maidenhead.

She recently began a food waste petition to allow supermarkets to donate their unsold food and has plans to open a homeless shelter and put on Christmas for 150 vulnerable people.

Her efforts, which have seen her feed more than 135,000 people in the last three years, were highly commended at a black tie gala dinner.

"I had a call at work saying I had won this award and I thought yeah right," said the mum-of-four.

"I thought it was a scam.

"I didn't know anybody had put me forward. I don't feel I do anything special, I'm just a mum who likes to feed people.

"It started three years ago and I thought this is it, one meal on one evening.

"If you had told me it was going to grow as it has I would have laughed."

Laura Stephens, a case manager for the youth offending team in Windsor and Maidenhead, put Sue's name forward for the award.

"Last Christmas we had four young people aged 16 to 18 who were homeless and had been placed in emergency accommodation," she said.

"Sue fed these young people over the festive period, giving them some hope and relief at a time when otherwise their futures seemed rather bleak.

"I do not feel that Sue is recognised for the life changing work that she does."