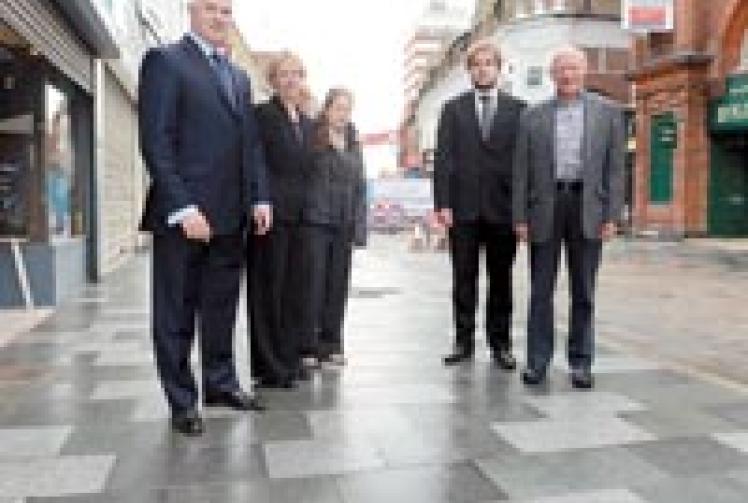 The project to bring new paving to the High Street between Costa Coffee and McDonald's began in July and the second phase started this week.

Shoppers have taken their first steps on the first part of a new-look Maidenhead town centre.

The first phase of the Royal Borough's £200,000 project to repave a 125m stretch of the High Street was completed on Friday, September 6, ahead of the Maidenhead Half Marathon.

The work saw the transformation of the street between Costa Coffee and McDonald's using the 'Maidenhead pallette' design, which is already used to link the Boy and Boat statue with Kidwells Park.

The tegula and granite slabs that have been used were agreed upon after a public consultation on a sample panel outside the NatWest bank in 2009.

"I will be really pleased when it's finished because it does cause a disturbance on the High Street but the guys have been really good and have been working with the businesses if there have been any problems."

The project was originally set to cost £400,000 but savings that were announced in April mean that further areas could be repaved in the future.

Steph added: "Hopefully, if the councillors agree, the works will continue and the whole High Street will be completed."

The second phase of the High Street repaving project was delayed when water started gushing from the site.

An old pipe under the pavement outside McDonald's burst at about 11am on Tuesday as contractors were removing old stones.

The leak was contained and fenced off as water flowed down a drain in the middle of the street.

Project manager Sarah Plowman said South East Water was called immediately but did not arrive to resolve the problem until after 5pm.

She added they worked through the night until the problem was fixed and repaired.

Contractors were back at work yesterday.