In pictures: Round the Thames Valley in 80 Ways

In pictures: Round the Thames Valley in 80 Ways 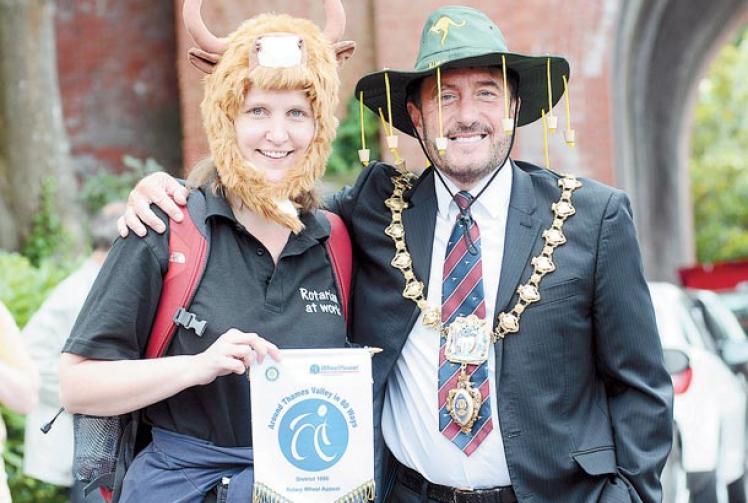 Getting from Maidenhead to Eton is not usually that difficult.

But enthusiastic Rotarians found some pretty novel ways of doing it on Sunday when they held a Round the Thames Valley in 80 Ways event. They made the journey in fancy dress on spacehoppers, skateboards, in wheelbarrows, on a broomstick and even in Doctor Who's Tardis.

It was all in aid of a good cause of course - the charity WheelPower, which helps people in wheelchairs lead active sporting lives.

Chris Rattenbury, an ambassador from WheelPower joined members of three Rotary clubs - Maidenhead Bridge, Maidenhead and Windsor St George at the start of the journey at Standing Arch in River Road, Taplow.

The event's two main organisers already looked ready for anything - Claire Booth was dressed as a witch being pushed in a wheelbarrow by 'butterfly' Pippa Wheeler, while Nina Lenton was a Highland cow.

An impressive looking dragon proved to be Chris Davies from Windsor St George Rotary, while Darth Vader also made a sinister hooded appearance.

The Mayor of Windsor and Maidenhead Cllr Andrew Jenner saw them off on their way as they headed for Bath Road towards Slough. The ultimate destination was Eton where street collections saw impressed passers-by contribute towards WheelPower.

But the travellers attracted a lot of attention on the way. Windsor St George member Phil Lenton said: "We stopped to ask people if we could have pictures taken of us on their boats, taxis or buses and people were happy to let us do it."

Money collected on the day has still to be counted but £1,500 had been made before the walk even began thanks to sponsors and supporters.