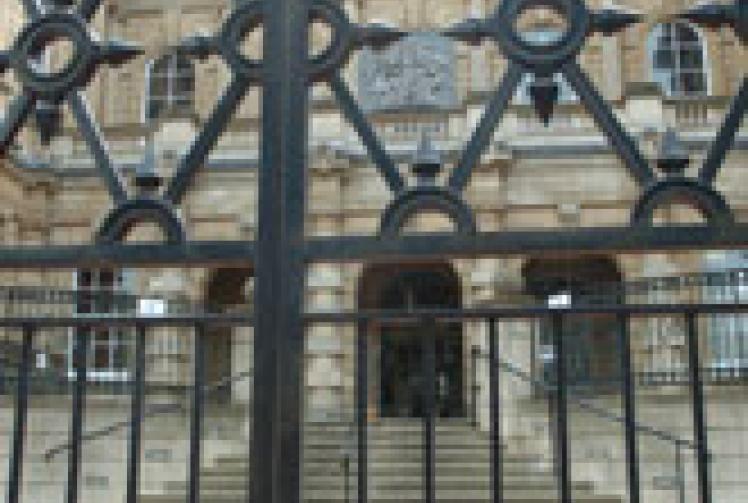 The woman whose Maidenhead home was allegedly set on fire by Malcolm Simpson was questioned at his trial today over their 'neighbourhood dispute' and the nature of their relationship.

Yesterday Alison Biggs gave evidence in which she said she'd 'lost everything' following two deliberate fires at her home in October 2011 and May 2012, and claimed she had been 'persecuted' by the defendant, who was her next-door neighbour.

Today Alan Walker, defending Simpson, 68, asked Ms Biggs about other occasions when she had been a victim of crime and had blamed teenagers for the attacks, which included her windows being smashed.

She had previously told the court the alleged persecution by Simpson included smashing her windows, throwing paint at her front door and cutting her Sky TV cables, and although she didn't witness the incidents she felt the defendant was responsible.

Mr Walker questioned whether teenagers could also have been behind those incidents, and suggested Ms Biggs' view of Simpson was 'blinkered'.

Her voice cracked as she said: "I know it's all down to him."

Ms Biggs told the court she and Simpson had sex once, but then agreed to just be friends, although his defence team has suggested their relationship was 'on-off' rather than 'one-off'.

Mr Walker suggested she was not entirely innocent in the dispute between the pair, reminding her she had received a police caution for swearing at her neighbour.

He said mediation had been suggested for the pair, and Simpson had tried to make peace by leaving gifts on her doorstep, but these had been rejected by her.

The court was then taken back to the day of the October fire, on which Ms Biggs, who was staying with a friend because she 'didn't feel safe' at home, had made a short trip back to her house to pick up some belongings.

On entering the back of the property she noticed a strange smell - later revealed to be petrol - and saw a window was open when it shouldn't have been.

Despite the warning signs someone had been in her home she chose not to call police, and later in the evening the first blaze was started.

Mr Walker asked why Ms Biggs did not alert police then when she had been quick to call them on other occasions, such as when Simpson had placed a cuddly toy Tasmanian Devil in a window facing her home.

She replied she didn't see the point because police wouldn't have done anything.

Read a previous report from the case below.