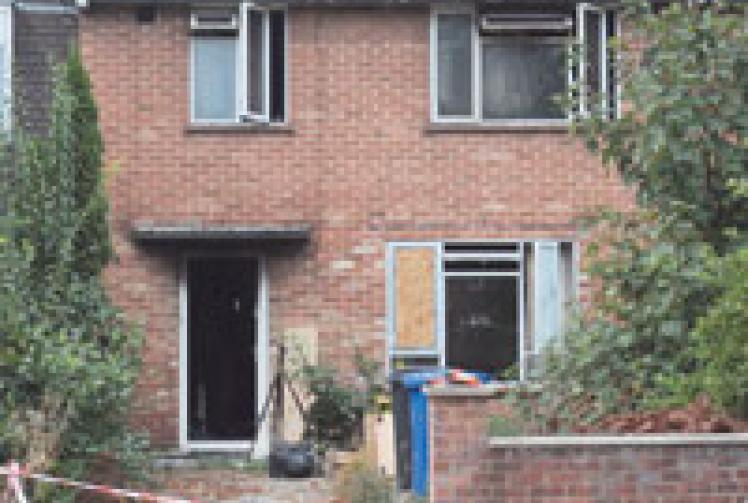 The house in Lancaster Road, Maidenhead, after the fire in October 2011

The trial of a pensioner accused of torching his neighbour's Maidenhead home twice and setting fire to another neighbour's truck has begun.

Yesterday afternoon a jury was sworn in to try the 68-year-old at Reading Crown Court.

The case was opened by Jane Davies, prosecuting, who said: "It is the Crown's case that the defendant embarked on a series of deliberate acts to intimidate his neighbours."

She added: "These acts endangered the lives of others."

The court heard evidence from Alison Biggs, whose home was destroyed by two fires; the second of which happened after she put it up for sale.

Ms Biggs had a one-off physical relationship with Simpson in 2010 before the pair agreed to just be friends.

But she said about a year later he began 'persecuting' her following an incident - details of which were not disclosed in court - which saw him arrested and bailed on the condition he did not contact her.

Her windows were smashed, her car tyres slashed, her front door lock superglued and her Sky TV cables cut, and while Ms Biggs did not witness these incidents she told the court she believed Simpson was responsible.

In October 2011 she was staying with a friend when a fire was started with petrol in a back room of her home.

She told the court she was alerted to the blaze by a phone call from Simpson in which he said: "Please don't report me but your house is on fire."

Ms Biggs returned home to find the road cordoned off and the emergency services at work.

Simpson was arrested at the scene and denied starting the fire.

The property was put up for sale by Ms Biggs, who said she 'didn't feel safe there', and was due to be auctioned when a second fire was started in May 2012. This time it was completely destroyed, and Simpson, who was sitting in his driveway, was arrested again.

When his home was searched police found some of Ms Biggs' belongings, including photo albums, inside.

She told the court: "I've lost absolutely everything." Simpson is then alleged to have switched his attention to a neighbouring family, and is accused of setting fire to their pickup truck in October.

He was arrested at his home after police officers called out to the blaze spotted petrol cans outside his front door.