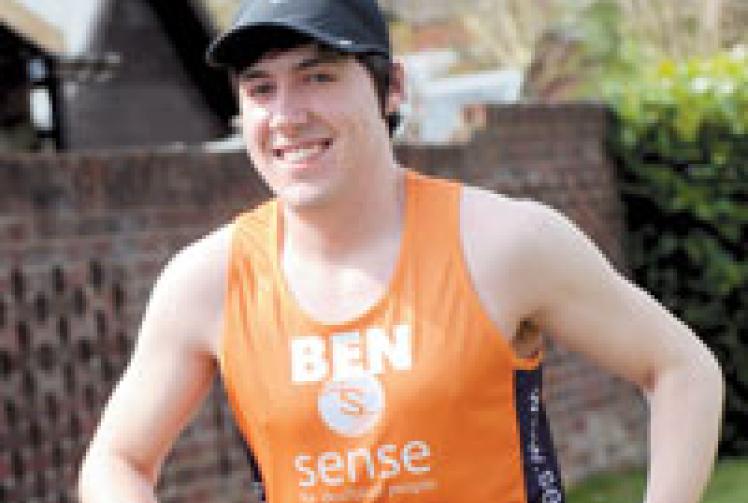 Runners from across East Berkshire are limbering up for the Virgin London Marathon on Sunday. They will join a field of thousands on the 26.2 mile route around the capital.

Fitting training in between a gruelling schedule which includes 16-hour days has proved a tough challenge for Maidenhead trainee solicitor Ben Gale.

The 25-year-old often works through to the early hours of the morning but has squeezed in late evening runs as part of a training regime that has seen the former Furze Platt Junior and Senior school pupil compete in the Colchester Half Marathon and the Maidenhead Easter Ten.

The Derwent Drive resident is hoping to raise £1,500 for deafblind charity Sense and has set beating the time of celebrity chef Gordon Ramsey, who ran the course in four hours, 26 minutes, as his benchmark.

The 18-year-old of London Road in Sunningdale, hopes to raise more than £3,400 for the trust, which helps young disabled and non-disabled athletes.

She will be joined by her friend Jo Unsworth, 18, a junior Great Britain rower from Henley, who was supported by the trust.

Katie Sylvester said she has been overwhelmed by the generosity of supporters who have helped her raise £4,500 for the Cystic Fibrosis Trust.

The married mother-of-two said she started running after having a mid-life crisis with the aim of running 10km by her 40th birthday.

She is running for the trust because a friend's daughter has been born with the condition.

"I have two healthy children and this has opened my eyes to the challenges faced by other people on a daily basis," said Katie.

Musician and Charters school teacher Arron Storey will be running two marathons this month in aid of two charities he worked with in Kenya last summer.

After spending August 2012 volunteering in Africa, Arron returned home and decided to do some serious fundraising for two UK organisations - Raise the Roof and Start Small which work for under privileged people in Kenya.

He ran the Paris marathon on April 7 and is now gearing up for the London Marathon on Sunday.

A charity that funds research into birth-related complications is being backed by Emily Bird.

The communications manager for the Hospitality Guild was moved to raise money for baby charity Tommy's after a friend who was pregnant with twins delivered one child stillborn and the other prematurely.

The 31-year-old from Ray Park Lane in Maidenhead is being joined in her fundraising efforts by 11-year-old daughter Katie, who attends St Mary's School in Cookham Road, and is training to run the Woodley 3km road race in support of the same charity.

She said: "I never, ever thought I would be able to do this so I have amazed myself."

Yvonne Olney will be running the London Marathon to raise money for the homeless charity Shelter.

The 55-year-old works as an accountant for BMSI in Windsor which has adopted the charity for this year.

The mother-of-two is married to former Royal Borough councillor and deputy headteacher at Eton Porny School Mark Olney and hopes to raise £1,800.

Yvonne, who has lived at Victoria Road, Eton Wick for 20 years, completed a 20 mile run in three hours 20 minutes two weeks ago and said: "It was cold but it is colder for those living on the streets."

Determined Jo Lawrenson is running to show her appreciation for a charity that has helped support her niece.

Jo, from Glade Road, is hoping to raise £3,500 for the Children’s Liver Disease Foundation.

It has helped her niece Ava, who lives in Cardiff, through two liver transplants.

The 42-year-old has been encouraged with the training by her daughters, Charley, nine, Francesca, 15 and Maddie, 16.

A Frenchman who swapped smoking for running is taking part in his first full marathon.

Baptiste Leyendecker-Adenot, of Queens Road, Slough, said: "I started running two years ago when I stopped smoking, going for a run to get rid of the frustration about the cigarettes."

The 38-year-old works in flight crew operations for British Airways and is hoping to raise as much money as he can for the Epilepsy Society.

He is inspired by his best friend's six-year-old niece, who lives with the condition.

Techno music and yoga have helped Mel Matthews get in shape to achieve her 26-mile goal.

The 37-year-old, of Barnhill Gardens, had to pull out of last year's marathon because of injury so this time around she is pledging to take it less seriously.

The mum-of-two is running for the Starlight Children's Foundation charity that grants the once-in-a-lifetime wishes of seriously and terminally ill children.

The 47-year-old of Littlebrook Avenue in Burnham, has supported the charity's work with disabled children and adults for several years.

His efforts for the organisation are especially significant since his mother's diagnosis with early stage Parkinson’s disease last year.

Visit uk.virginmoneygiving.com/TerryHughes to sponsor him.

The London event is an extra challenge for Dominic Rees who has pledged to tun at least three miles a day for an entire year.

The IT services worker, from St Margaret's Road, started his challenge on September 4 has covered more than 850 miles so far.

The father-of-two is running in aid of the Cystic Fibrosis Trust, which is close to the family's heart as it affects their 15-month-old goddaughter and niece, Chloe.

Text RACK99 £10 to 70070 or visit uk.virginmoneygiving.com/DomRees to donate.

A determined project planner from Eton Wick will run the London Marathon for the second time for both her grandfathers.

Amanda Allan, of The Walk, will be running in aid of the Royal National Institute of Blind People (RNIB), which supports blind and partially sighted people.

Amanda said: "I asked one of my grandfathers who he wanted me to run it for and as he is partially sighted he said the RNIB."

Visit http://uk.virginmoneygiving.com/amandaallan to sponsor her.

A mother-of-two is pounding the streets hard as she prepares to take on her first marathon on Sunday.

Angela Field, 38, of West Windsor, will take part in aid of the Berkshire East & South Bucks Women’s Aid, who she is hoping to raise £2,500 for.

Angela, a manager at a telecommunications firm, said she decided to do it as the charity has struggled to maintain its service and she thought if it can rise to the challenge then so can she.

A psychology student at Cardiff University is running to raise money for the hospice who cared for her dying grandparents.

Rachel Farquhar, from Foxes Walk in Charvil, hopes to raise more than £600 for St Ann's Hospice in Greater Manchester cared for Albert and Mary Fisher before their deaths in 2000 and 2009.

the 20-year-old has been training to music by Justin Timberlake and has also worn badges given to her by the hospice following her grandfather's death.

The keen squash player hopes to finish in four-and-a-half hours.

RSPCA inspector Derek Wilkins hopes to finish in under five hours and raise £2,000 to help animals in the area.

The married 56-year-old, who lives in Taplow, said has become a passionate runner after giving up smoking.

His sponsorship will go to the RSPCA Maidenhead and East Berkshire branch and help pay for treatments including neutering, microchips, vaccinations and cattery and kennel fees for animals.

The Burnham Joggers club member said: "Any money I get for the animals is well needed."

Two supporters of a campaign to build a children's hospice are running the London Marathon.

Caroline Gillett, lives in Woodlands Park, Maidenhead - a stone’s throw from the site where the Alexander

The Slough-based charity was set up by Fiona Devine and her husband John in memory of their son Alexander who died of a brain tumour aged eight.

The second runner for the children's hospice is Richard Davis from Cookham.

Pilates and fitness trainer Suzy Bujakowski from Bitwell will be running for The London & Slough Run, which works to provide food, drink, clothing, bedding and toiletries for homeless people.

"Quite a few people who come to my Pilates classes are involved with it and I wanted to do something to help raise money for them as I can't give my time up every week," she said.

The 45-year-old, of Dove House Crescent, will be supported by her children Alicia, 14 and Greg, 11, who can't wait for a day out in London.