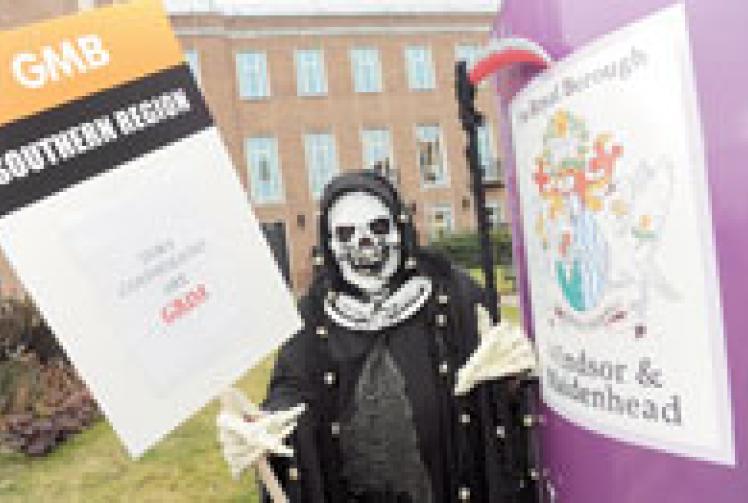 A GMB union member at a protest in the autumn

Angry trade unionists say the Royal Borough is 'out of step' with other authorities in failing to introduce a 'living wage' for low earning staff.

The GMB union is calling for a minimum wage of £7.45 an hour for employees, which they say more than 40 councils outside London have signed up to, as some employees are on just £6.99 an hour.

All council employees are paid higher than the national minimum wage, which is £6.19 for adults over 21.

The rise was given alongside new flexible contracts from February 1 for its 1,620 employees, a move which was met with protests when they were given out in the autumn.

Frank Minal, GMB regional organiser, said: "I fail to understand how Windsor and Maidenhead can continue to be so out of step with other authorities when it comes to low pay.

"Neighbouring councils such as Slough and Reading are attempting to address this important issue with the introduction of a living wage as standard.

"In addition this pay round has been imposed after months of no formal response from the councillors sitting on the employment panel."

He said he will be consulting with members and the union will consider its options.

About 480 employees in the Royal Borough are members of GMB, with many working in education, but also in other sectors.

Council leader Cllr David Burbage said: "We have ensured anyone paid under £30,000 will be getting at least a one per cent increase in base salary.

"Something other councils haven’t yet agreed upon, and I believe pay freezes or cuts are still widespread in the private sector."

Cllr Burbage added: "I don’t believe the unions are in tune with our staff.

"We have targeted increases to the lowest paid workers, alongside new flexible contracts to better serve residents.