Shona McCallin: 'This bronze feels just as good, if not better, than my gold in Rio' 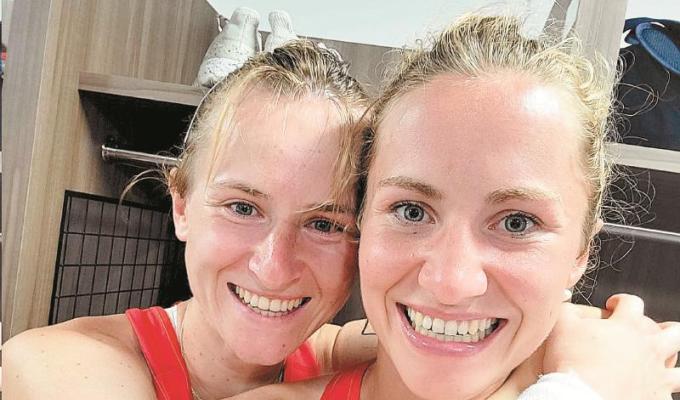 With the adrenaline of Friday’s 4-3 victory over India still coursing through her veins, warding off the jetlag and fatigue, Maidenhead’s Shona McCallin said the experience of winning bronze in Tokyo was as good, if not better, than taking gold in Rio five years ago.

With the adrenaline of Friday’s 4-3 victory over India still coursing through her veins, warding off the jetlag and fatigue, Maidenhead’s Shona McCallin said the experience of winning bronze in Tokyo was as good, if not better, than taking gold in Rio five years ago.

The Team GB women’s hockey player was one of the standout players as the side recovered from the low of losing to the Netherlands in the semi-finals last week to seize bronze in a topsy-turvy but entertaining play-off with India.

Maidenhead’s Ellie Rayer fired Great Britain ahead, but in the blink of an eye they frittered away a two-goal lead to go in trailing 3-2 at the half-time interval.

McCallin said the break came at a good time for the team as it allowed them to ‘look each other in the eye’ and refocus for the second half. Captain Hollie Pearne-Webb and Grace Balsdon then fired them to a stunning victory.

The medal was reward not only for their efforts in Tokyo, but for the difficult and disrupted journey the team has been on since claiming gold in 2016. In the intervening years they’ve had three head coaches and seen numerous players retire or forced to retire through injury.

The young, talented, but inconsistent side travelled to Tokyo hoping, but not expecting to win a medal and that made the achievement even more satisfying according to McCallin.

“The last five years has been a very disjointed period,” she said. “Team wise we went through different coaches, three different head coaches in that time which brings its own challenges on that level.

“I had a few fair injuries as well, as well as a long term one where I was out for 18 months in the middle of those five years.

“We’ve all had to navigate our way through COVID, which challenged us all and the team’s spirit. We found a way to overcome that on the hockey pitch and away from the hockey pitch.

“So, the bronze medal for me feels just as good, if not better than the Rio gold. Just because of the journey we’ve been on over the last five years and the toll it’s taken on a team level and a personal level.

“We went into these Olympics hoping we could pull it together, but consistency had been letting us down heading into Tokyo. We knew we had the ability to do something special, but it was just about the consistency, and it all came together at a nice time.”

McCallin feels that the hockey teams really earn their medals at an Olympic Games. They played eight matches in 14 days, experiencing some highs and lows along the way, but stuck together throughout to get their hands on a precious medal.

Reflecting on Friday’s final, played in 42degree heat, she said: “Two-nil is one of the most dangerous scorelines in sport and that game kind of showed why. It felt like we just blinked, and we were 3-2 down.

“Half-time came at a good time for us and we were able to reset and regroup, look each other in the eye and reset.

“The first five minutes of the second half were pretty good for us. It gave us a bit of belief that if we continued doing the right things it would come.”

She added: “We always say we have to earn our medal. We played eight games in 13 or 14 days. We arrived the day before the Olympic Village opened and we left the day before it closed. We were there for most of the time it was open and saw athletes come and go as they had to leave when their event was over because of COVID restrictions.

“It’s hard work being under that pressure for that long, but it makes you appreciate what we had to do. “We had to fight through the ups and downs of the tournament. Take a sprinter, you have one bad race and you’re out, whereas for us, you can have a bad game and you’re not out. We’re also lucky in that respect.”

After flying home on Sunday, McCallin has been sharing her experiences and celebrating with family and friends, enjoying ‘her best days in a long time’. The welcome the team received after disembarking the plane at Heathrow is also something that’ll live long in her memory.

“It’s a mixture of adrenaline, jet lag, lack of sleep and fatigue accumulating into a bit of a weird feeling,” she said.

“We finished on Friday and since then it’s just been some of the best days that I’ve had in a very long time.

“We had two days in Tokyo as a team under no pressure, which was amazing followed by the flight back to Heathrow on Sunday evening.

“It was a huge shock and surprise for us to see so many people there, welcoming us home.

“Not just from friends and family of the hockey team but also those from other athletes as well. It was amazing to hear all the cheers for us.