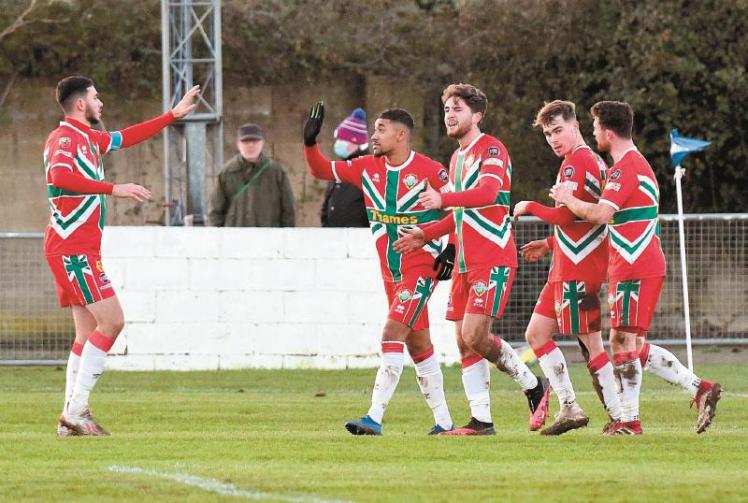 Windsor’s season may have been officially ended last week, subject to FA ratification, but manager Mark Cooper remains hopeful the Royalists can take part in a six-week long local Hellenic League competition through April and May.

It’s only a suggestion at the moment, however, the Hellenic League does appear to be open to the proposal of local clubs coming together when restrictions allow to play a Champions League style competition with a trophy to be lifted by the winners.

The Hellenic League season, as with all football at steps 3-6 was curtailed last week following consultation with clubs, but no official decision has been taken yet on whether to null and void the results. Cooper is sure that will happen with many clubs having played fewer than 10 of their scheduled matches.

He’d be in favour of the club taking part in a six-week competition, believing it would give the players – and maybe even the fans, if they were able to return for matches in May – something to look forward to. However, he acknowledges there are cost implications for clubs that take part in the competition and supporters wouldn’t be able to attend matches in the early rounds of the competition to subsidise it.

“They have curtailed the season but there’s nothing yet to say that it’s been null and voided,” he said.

“Or if they’re thinking of using some other method. I expect it to be null and void, but they haven’t given us that news yet. Curtailing is obviously the right thing to do, because even though the season has been extended until the end of May, there’s not enough time to play 30 matches.

So, there is news today of a potential six-week Hellenic local competition. It’s being spoken about, it’s not concrete yet but there is a proposal. They’ve asked for our opinions on that, but I see no reason why that proposal, once the FA confirm the full details of the closure of the season, couldn’t go ahead and give everyone some football to look forward to.”

If it were to proceed the plan would be for players to return for a two-week pre-season from March 29, when community team sports are able to return under a loosening of lockdown restrictions. The competition would then get underway from mid-April and continue through until May with a team emerging as champions at the end of it.

“That’s the gist of it but nothing has been confirmed or ratified on that,” said Cooper. “That’s what’s being talked about.

“The difficult is there’s a cost implication to that. It doesn’t look like there will be supporters able to come into grounds to help us subsidise those matches.

“From a manager’s point of view, we’d all want to participate in a competition like that, but if you’re a football club chairman, there are the cost implications to think about. Getting the pitches ready, opening the grounds again, paying for officials and training facilities, because a lot of clubs don’t train at their own ground.

“So, there is a cost implication without any chance of recouping that money through the turnstile or bar revenue. I can see that point of view, but as a manager you want those matches to take place.”

Fans are set to be allowed back into grounds from the middle of May but that wouldn’t give clubs much of an opportunity to bring in revenue before the competition comes to an end. From the end of May, Cooper says clubs could take their regular break for the off-season before returning to pre-season training in July. He also doesn’t see any reason why next season couldn’t kick off as planned, with fans in the grounds, from August.

“We don’t see any reason why we couldn’t start the season on time,” he said.

“If they’re talking about dropping all restrictions in June, well you wouldn’t play any pre-season matches until July anyway. So, if all restrictions are dropped, I can’t see why we couldn’t just have a normal season.”