Blues are looking up after back-to-back league victories 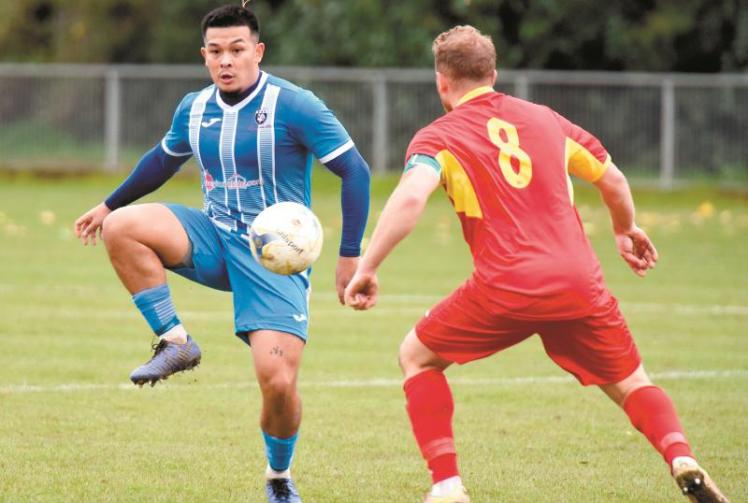 Back-to-back league wins have propelled Burnham up the Hellenic Premier Division table and led player manager Ashleigh James to contemplate a raid on the top five which looked unlikely only a week ago.

Before Saturday’s 1-0 win over Royal Wootton Bassett Town and Tuesday’s 2-1 away win at Holmer Green, the Blues were sitting precariously close to the relegation places, their league form having suffered due to the club’s efforts in the FA Cup.

But they doggedly battled to a 1-0 win over Bassett at The Gore on Saturday, Rashid Hamid scoring the winner with a thunderbolt of a strike.

They fell behind at Holmer Green on Tuesday but showed the same spirit to fight back and pick up the points thanks to two goals from Manny Williams. The victories have lifted the side to 11th in the table, just a handful of points off fifth placed Fairford Town who they host on Saturday.

Reflecting on a positive week for the club, James said: “Before the Virginia Water game I was looking to target 10 from the next five games.

“We’ve played three of those and we have seven so we’re well on the way to our target.

“The FA Cup run was brilliant, but it distracted us from the league and we were playing catch up and the results weren’t coming.

“The performances were positive, but for some reason, with mistakes and other little things we weren’t getting the results. Getting back to back wins is good though and we’re now looking to climb the table.”

James praised the character shown by his side to fight back after conceding first at Holmer on Tuesday.

“We showed great character,” he said.

“We gave away a goal, but we came back, and the attitude was spot on from everyone and we prevailed in the end. We could have maybe come away scoring four goals. In both games the other management team said we deserved it which is good to hear.

“You only need to string a few wins together. On Saturday we’ve got Fairford and if we were to win that we’d only be a point behind them and on the edge of the top five.

“We’ve got enough players and more than enough quality to start building. We’ve got to make the most of it because we don’t know if there’s another lockdown coming or not. It’s important we put in as much effort as we can.”

With Maidenhead United and Slough Town having to play matches behind closed doors, Burnham have also seen a rise in attendances at The Gore this season, with between 100-200 fans watching their home matches.

“Everyone is happy with how things are going behind the scenes,” added James. “Yeah, we keep getting over 100, pushing 200 most of the time which is good.

“The people are enjoying it from the feedback we’re getting and they’re coming back as well.”