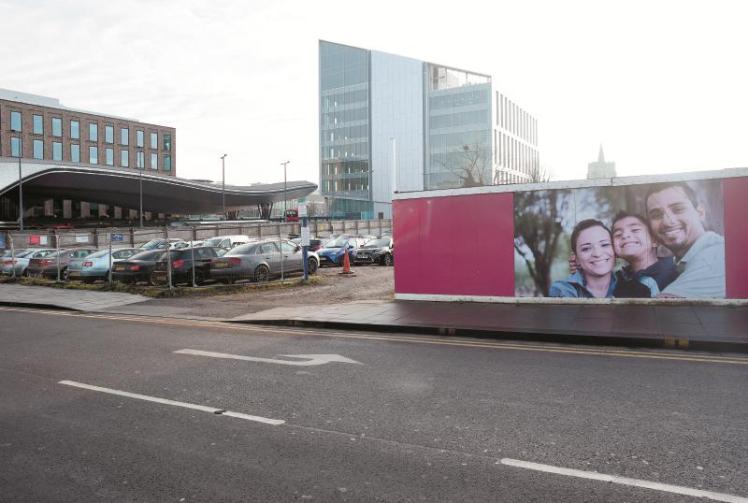 A seven-storey office block has been given the green light for construction in Slough town centre.

Councillors approved plans for the former Octagon site, in Brunel Way, during a virtual planning committee meeting on Wednesday

The land, which is currently being used as a temporary car park, has been the subject of numerous regeneration projects in recent years including a proposed hotel and residential scheme in 2017.

Ground floor retail space is also included in the plans alongside 118 car parking spaces and 140 spaces for bicycles.

Planning officers told the meeting the site had been underused for a number of years and the scheme would ‘present a positive image of the town’ in a prime town centre location.

Cllr Pavitar Mann (Lab, Britwell and Northborough) asked officers whether any public consultation had been completed for the scheme.

The meeting was told that the applicant had not carried out any letter drops for the public due to ‘limited responses’ on its previous planning applications for the site.

Cllr Mann responded: “This is a major site in the town centre and frankly I think it’s unacceptable that they didn’t do any consultations, certainly at a time when other sites are coming forward in the town centre.

“I appreciate it’s not a material planning consideration but nor am I not going to call that out either.”

Councillors voted unanimously in favour of the application but a Section 106 agreement must be struck between the developer and the council on the level of financial contributions provided for sustainable transport in the area before planning permission is granted.

W Councillors also gave the go-ahead for the construction of a six-storey residential building including 75 flats at 426-430 Bath Road.In February last year the applicant secured outline planning permission for a development featuring 60 flats but it returned to the council after finding room for 15 extra flats on the site.

Only seven flats, 10 per cent, will be classed as ‘affordable housing’ with the applicant citing ‘high development costs’ as a barrier to creating more.

Slough council will need 'radical action' to get out of financial hole, council hears

Will I still have to wear a mask on public transport in Windsor and Slough?

Seven arrests in connection with drugs investigation in Slough

What are the new rules for hospital visitors at Frimley Health Trust?