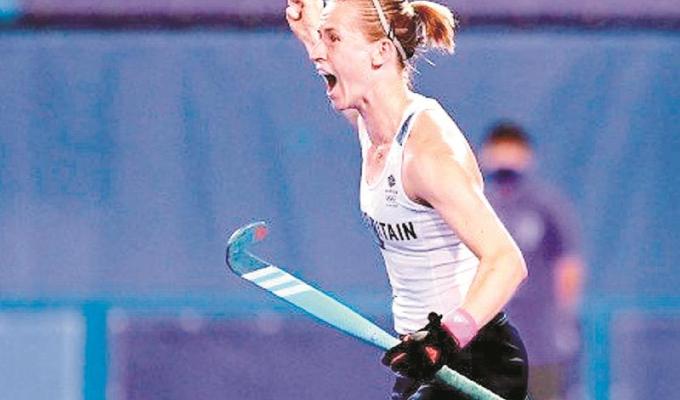 Rayer touched home GB’s equaliser on the stroke of half-time before racing clear to slap home the side’s fourth in the final quarter. Lily Owsley and Laura Unsworth were also on target in GB’s first victory.

An entertaining opening game finished 2-1 to Germany, with Sarah Jones scoring on her Olympic debut.

The women’s team are defending the title they won in Rio in 2016, but the team is much changed from the one which beat the Netherlands on a penalty shoot in the final in Brazil. Maidenhead’s Maddie Hinch, Giselle Ansley and Maidenhead Hockey Club coach Shona McCallin are also in Tokyo hoping to guide GB to further Olympic glory.

The team are next due to play India on Wednesday (2am UK time) while the Netherlands will be looking for revenge when they face GB in their fourth match on Thursday (11am UK time).

Marlow’s Sam Ward is showing great form for Team GB’s men’s hockey team at the Olympics in Tokyo, scoring twice in their opening pool victories over South Africa and Canada.

Ward – who was partially blinded in one eye after being hit in the face by a ball in an Olympics qualifier two years ago – netted as the team opened up with a 2-1 win over South Africa. Phil Roper was also on target.

He also fired home with a low drive from a penalty corner as GB resisted Canada’s late fightback to win their second match 3-1. Liam Ansell also scored twice as the side secured a second victory.

Great Britain now move on to face Germany in their final pool fixture tomorrow (Tuesday, 4.15am UK time) and sit second in a group of six, with the top four set to progress to the quarterfinals. Maidenhead’s David Ames has also been selected for the men’s team.

On Thursday Windsor’s Mallory Franklin, the 2017 world champion in the women’s C1 slalom canoe, will be hoping to go for glory in the event’s Olympic final at the Kasai Canoe Slalom Centre from 6am to 8.45am UK time.

The athletics gets under in Tokyo on Friday, with events taking place over the following 10 days. Windsor, Slough, Eton & Hounslow AC (WSEH) have three athletes at the Games, Morgan Lake in the High Jump, Taylor Campbell in the hammer, Jessie Knight in the 400m hurdles and 4x400m relay, while former Piggott School student Zak Seddon will race in the 3,000m steeplechase.