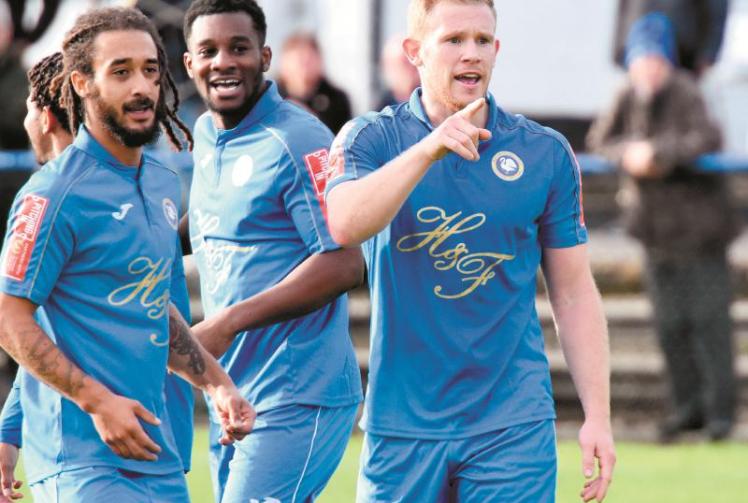 Baker, who made 160 appearances for the Sky Blues, netted twice for the visitors while Royals favourite Lita and Marcus Kelly were also on target as Borough overcame a ring rusty Blues side.

James Clark scored a late consolation for the Blues from the penalty spot and manager Mark Bartley berated his side’s failure to take their chances.

Nuneaton set the tone early on with Baker curling an impressive free kick past Simon Grant in the 20th minute. With the wind behind them, the visitors continued to pile on the pressure and came close to doubling their lead through Shamsi and Baker.

As for Marlow, their first real chance arose when Clark rolled an effort just inches past the post. However, Nuneaton made it 2-0 five minutes from half-time when Lita coolly tucked an effort away following a quick throw-in.

The second half saw a marked improvement for Marlow who called the Nuneaton ‘keeper into action early on following Devontae Romeo’s well struck effort. But, two minutes later the visitors extended their lead seemingly against the run of play when Baker slotted away his second goal of the evening.

The away side made it 4-0 in the 74th minute with Kelly scoring from close range.

Reflecting on the match, Bartley said: “They had a couple of them for Nuneaton who had played at a good level. I think the better side won on the day. We didn’t have too many regrets. When you’re looking for a cup upset you need to maximise your openings. We had a few but we didn’t quite make the most of them and that was probably telling at the end.

“We looked a little bit rusty as well, and looked like a side that hadn’t played in a few weeks.

“They managed to get a few friendlies in themselves, and when we usually have energy to move sides around the pitch, we didn’t quite have that.

“So, it wasn’t great but this will be a challenge for many sides as we look to combat this long layoff we’ve had.”

The Blues are now waiting for an update from the Isthmian League to see if they can get back to league action before Christmas.

The league has said it will release a further statement on December 16 and Bartley remains hopeful that teams in the South Central league – all of whom are in tier 2 areas - will be able to kick off their fixtures again from December 19.

Last week Bartley claimed the league’s hesitancy to resume fixtures at steps 3 and 4 could break the non league football pyramid and effectively create a ‘national lockdown’ for clubs at those levels.

Dozens of clubs in the north east and north west – as well as several in the south east – are reluctant or unable to resume their league season behind closed doors after the Government placed their region in tier 3 of coronavirus restrictions.

Bartley said the Isthmian League were considering a number of options for completing the league season, including starting games again in December or waiting until January, splitting the league into smaller ‘mini leagues’ based on clubs’ geographical location or determining promotion/relegation on a points-per-game calculation if the season gets to a certain point but isn’t able to finish on time.

Bartley said another option was adjusting the fixture list so that clubs would only play each other once, either home or away.

The league is waiting for a Government announcement on the tier restrictions on December 16 before deciding if fixtures can kick off again on Saturday week (December 19).

“Everybody is of the understanding that we do need to have promotion and relegation this season,” said Bartley.

“They’re now trying to figure out the best way to do this. So, I think after the 16th we’ll see the league says.

“However they want to resolve it I think the fact we’re not being allowed to play now isn’t great. We can play a friendly now with crowds against step 3 or 4 sides but I can’t play a league game against them which is unbelievable. Bracknell played one last week and had 300 people in the ground. But we can’t play a league match.

“They’ve done a lot of work on this rather than simply working out the practicalities of people going back and getting to play football. And the reality for clubs like ours is we wouldn’t be able to pay players if we don’t have the gate receipts. How do you cover the costs of them getting to training? They can’t train indefinitely without any expenses. It’s a mess.”