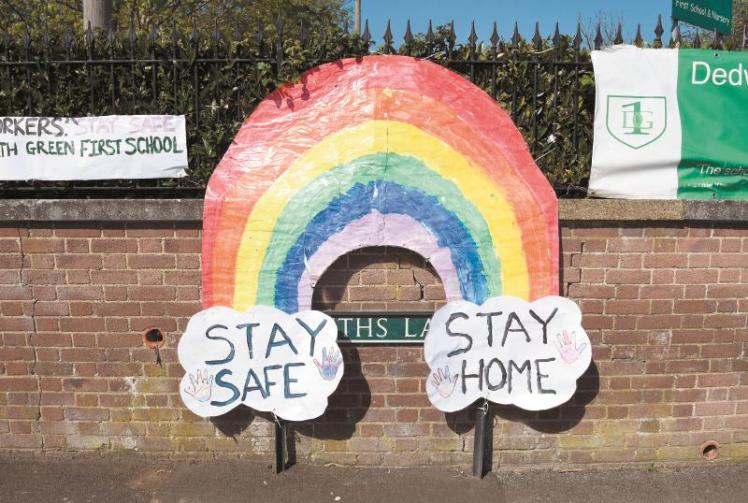 Every week, we are publishing a ‘positive news’ section, complete with feel good stories of communities pulling together in these times of trouble. If you have a good news story you’d like to share, email news@baylismedia.co.uk

WINDSOR: Children of key workers at Dedworth Green First School created a giant rainbow, which was then installed over the sign for Smiths Lane, Windsor.

“The children who have been at school during the pandemic painted the rainbow to show our support to key workers in our community,” said Louise Brown, headteacher.

“It's an incredibly tough time for us all, but we wanted to say thank you to all of the NHS workers and key workers in our community for all their hard work and support.

“The children were really proud of the finished work.”

Volunteers with GoodGym either take part in group runs, jogging to community spaces to work on restoring them together, or mission runs and coach runs, whereby the volunteer visits an elderly person in need.

Due to COVID-19, the organisation has had to cease facilitating these activities, for the safety of vulnerable people.

However, being exercise-focused, GoodGym Windsor and Maidenhead has continued encouraging self-isolation exercise, by making obstacle courses with garden furniture, or jogging around the block mapping the route using digital drawing tools.

From these, runners can made Strava Art - digital paintings made out of the routes drawn by GPS, which tracks your location.

By running in interesting route around the area, creative joggers can make some interesting pictures.

MAIDENHEAD: Maidenhead's Tuneless choir has had 130 new members in the last two weeks.

Its new online presence is enabling members in Maidenhead to share the experience with their friends and family who live elsewhere. One member, Lynn McLeish, has invited her sister in Scotland and her niece in New Zealand.

The choir, which celebrates loud and proud singers who may not have an ear for tone, hosted a 'Pyjama Party' themed night for its members, sporting singers in onesies and dressing gowns and clutching teddy bears.

Free places in the choir are offered to people whose income has been impacted by coronavirus and there is an option to ‘gift’ a place. So far, nine free places have been requested, with 14 places gifted.

That has made another £25 for mental health charity Mind, making a total of more than £8,160 raised by the choir so far.

Member of the choir Tabitha Beaven of Norden Road said:

“Although we can’t meet in person, we’ve never been a choir that takes ourselves too seriously and so we’re finding ways to inject this sense of fun to an online format.

“As well as ‘singing like no one is listening’ we’ve introduced a ‘dance break’. People really go for it and play up to the camera. It’s a great way to burn excess calories from lockdown snacking.”

The choir is ‘meeting’ every Wednesday night from 8-9pm. To join, go to www.tunelesschoir.com/tuneless-online

MAIDENHEAD: Zita Newcome of Teddies Music Club, Maidenhead, has released a free exercise video based on a book called Toddlerobics that she made when her children were young.

"My brother told me Joe Wicks keep fit classes were too advanced for his little girls and he was having trouble getting to exercise in the house,” said Zita.

“So I got to thinking about it and what could be done to help under fives. They do seem to have been a bit overlooked on the health and well being side."

Dedicated to all the toddlers at Teddies Music Club at the time (the group has been running for more than 27 years), the book has now been turned into a video and posted online as a free exercise for tots.

It has been viewed more than 50,000 times on Facebook, and has reached as far as viewers in the Highlands.

MAIDENHEAD: A photographer who opened a studio in the Nicholsons Centre in September is helping raise funds for the NHS by donating 100 per cent of her income from discounted studio sessions.

Selen Pleace of Selen Photography is offering a one-hour studio session for a 16x12 print in exchange for a £30 donation to the NHS. The normal cost of this session is £100.

The name of campaign is ‘One Photo For Life’ and Selen has raised £90 so far.

To take advantage of the offer, visit www.justgiving.com/fundraising/selen-pleace

MAIDENHEAD: A volunteer has been delivering prescriptions to the elderly since his business went quiet because of the coronavirus pandemic.

Paul Battimelli, 57, has been dropping off medication to the customers of Wessex Pharmacy, in Wessex Way, since March 24.

He is the owner of Reflex Services, which specialises in ovens, washing machines, dishwashers and tumble dryers.

“I am working but people are not ringing,” Paul said. “Either they think we’re not working and they just don’t even bother asking, or they’re scared to have me out.”

But Paul, who lives in Cox Green, is adhering to government guidelines and equipped with surgical gloves and a mask.

He said the voluntary delivery role has been ‘a godsend’ and gets him ‘out and about’ – making about 20 drop-offs a day which he completes in about two hours.

“It gets me out in my van, I’m out talking to people, even though it’s at a distance, of course.”

Paul said his new customers ‘are very, very appreciative of the service’ and the ‘little bit of interaction’ it brings.

To stand out while making deliveries – Paul often wears a sombrero while doing his rounds.

MAIDENHEAD & COOKHAM: The owner of a fruit and vegetables company is giving people the chance to nominate a worthy recipient to receive a free box of fresh produce.

Up until lockdown, Ges Dale delivered fruit and vegetables to local schools, cafes and restaurants in Cookham, Maidenhead and Windsor through his business ‘Blue Banana’.

In a bid to keep his business going he decided to switch to home deliveries and was flooded with about 1,110 requests in just three days.

Ges said messages came from nurses and doctors who could not get fresh produce, those who were recovering from illness, and people who lived hundreds of miles away but were enquiring on behalf of elderly parents.

With these messages in mind, Ges decided to start a weekly giveaway of one of his £30 mixed fruit and veg boxes to someone deserving.

“We just thought, we’ll try and give a box away every week,” said Ges. “We’re going to do it every week I think until this crisis is over.”

To nominate a member of the community, share and like, or follow, the Blue Banana Facebook page and then make a nomination, including a reason for it. Nominees must live in the Cookham or Maidenhead area and every week nominations close on Thursday at 11pm and deliveries are made the following day. 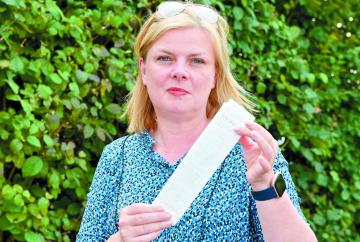