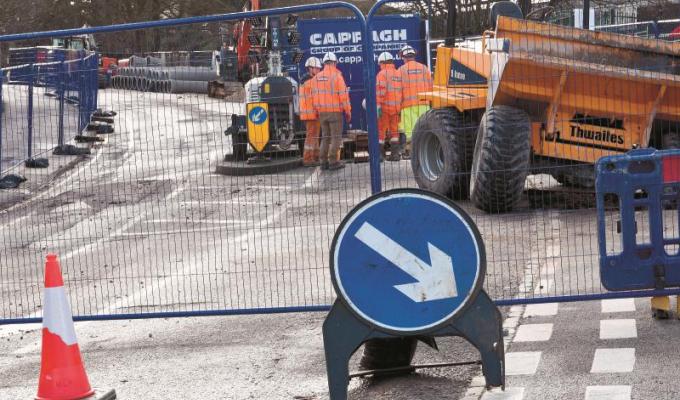 A busy Maidenhead road could be closed for 'up to another seven weeks' after a sinkhole appeared.

The Royal Borough tweeted last Thursday to say that the closure in Shoppenhangers Road – between Ludlow Road and the entrance to Desborough College – will be in place for eight weeks.

This is following advice from Thames Water, which is fixing a broken sewer pipe underneath the road.

A temporary pipe carrying sewage was installed by the company last week.

South East Water is also on site replacing its damaged clean water pipe, which caused some disruption to water supplies in nearby properties.

An overland pipe was put in place to restore clean water.

Desborough College was affected and had to close for several days due to health and safety fears over the drinking water. The boys’ school reopened on Monday.

A Thames Water spokesman said: “A number of factors could have caused the road to collapse, and our engineers are working closely with South East Water to investigate exactly what happened.

“A large section of sewer pipe needs to be replaced, and the road has been closed to ensure this is completed safely and efficiently. We’re really sorry for the disruption and inconvenience this is causing.”

The company added the road could be closed for up to another seven weeks, and while the road is closed it will be carrying out extra strengthening work further along the pipe.

Philip Cereda, regional works delivery manager at South East Water, said: “All water supplies have been restored using an overland pipe and we are sorry for any disruption caused by the damaged pipe.

“We will soon begin replacing the damaged pipe and we will carry out this work as quickly and safely as possible, however it will not impact customers’ water supply.”

The closure of Shoppenhangers Road has affected bus routes in and out of the town centre.

Courtney Buses tweeted last week: “Service 7 to Woodlands Park and Service 4 are diverted via Harvest Hill Road and cannot serve Desborough School. Please use stops on [the] A308 at the station.”

Road diversions for drivers are also in place.