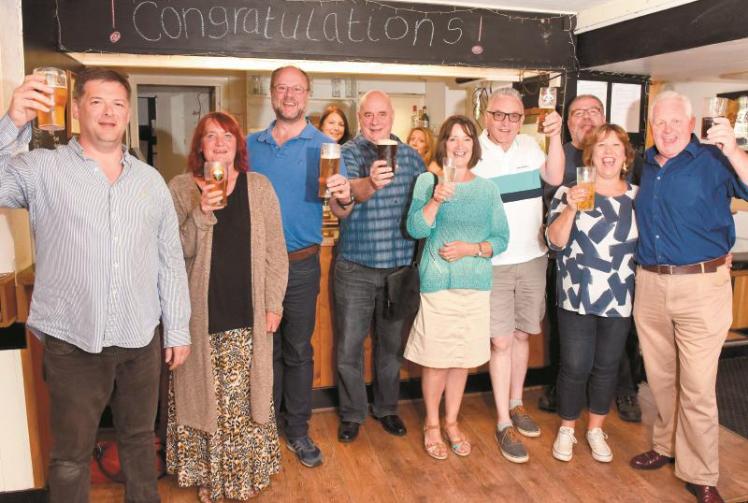 The chairman of the group that successfully bid to bring a pub in Gringer Hill into community ownership has shared their vision for its future.

Under the slogan ‘Your Pint-sized Community Pub’ work has already begun on the aims laid out in their business plan.

Mark said: “Now we’ve got the keys this is where the real work starts, we’re looking for new staff that share our dream of a community-lead real ale pub and we can start to redecorate.”

In 2015 regulars and residents succeeded in having the Craufurd Arms, one of the town’s oldest pubs, listed as an Asset of Community Value.

So in August 2016 when the owner, the Wellington Pub Company, announced that it was selling the property, local people acted quickly to set up CASL.

Added to a grant from More Than A Pub, and a loan from Co-operative & Community Finance, this was enough to proceed with the purchase of the pub. The transfer of ownership was completed while continuing to serve its loyal customers.

The child-friendly, dog-friendly pub has two crib teams, two darts teams and shows a wide range of sports on TV.

Mark added: “We’ve done this to safeguard the future of the community. The pub has always been popular but has suffered from under investment. Under community ownership we will be investing the surplus in improving the pub.

“And with the support of well over 200 members I’m sure it is going to be more popular than ever.

“Once we’ve improved the pub and start making a profit we hope we can reinvest the money back into the community that supported us.”

Jenny Sansom from Power To Change, an independent trust that part funds the More Than a Pub programme said: “There is amazing community spirit on display here.

“By making sure pubs host groups and charitable events, people are keeping their local pub open and offering much more than a good pint.”

There will be an official ‘Grand Opening Weekend’ to celebrate the new community ownership from Friday, July 21-23 during the Maidenhead Festival.