Organisers of this year's Norden Farm Lantern Parade are quietly confident this year's could be one of their best yet after a bumper weekend for lantern making.

More than 100 children packed out workshops to begin crafting their illuminations for the annual event on Saturday, December 10.

Saturday's session in the Nicholsons Centre saw about 70 youngsters making yeti shaped lanterns, while a further 50 were at Norden Farm the next day to begin their unicorn-themed creations.

And future groups can look forward to start working on trolls and dragons for the event, which will have a mythical creatures theme this year.

Speaking afterwards, Robyn Bunyan, Norden Farm's education officer and one of the main organisers of the event, said: "It's been a higely successful weekend.

"I think we had about 70 drop-in at the Nicholsons Centre which was just remarkable.

"For the first one last year we were having to call people over to get involved, but this time around we were swamped.

"I don't want to tempt fate, but I think it's already set us up for what could be a very big parade."

In the nine years since the first parade was held it has grown from a small stroll round the town centre in the daytime to a huge social event.

Last year's Carnival of the Animals-themed event saw more than 1,000 of all ages taking part and featured the town crier for the Royal Borough of Windsor and Maidenhead in a starring role, as well as live music from the Bollywood Brass Band.

Robyn added: "Everyone is really excited about it and I think it's really something people are starting to look forward to every year now."

A few places are still available for lantern workshops, costing just £3 per person they are held at Norden Farm and the Nicholsons Centre.

On parade day, live music starts at 4.30pm before the pageant departs from outside Maidenhead Town Hall at 5pm.

Once again, the Bollywood Brass Band will lead the procession.

They will be joined by Beatroots Samba Band, Reading’s community drumming group, to add to the party atmosphere.

Norden Farm will be working with award-winning community arts charity Same Sky, which has helped create the last five parades.

Each year, Norden Farm raises more than £15,000 to be able to produce the parade, which is supported by the Spoore, Merry and Rixman Foundation, The Prince Philip Trust Fund, The Louis Baylis (Maidenhead Advertiser) Charitable Trust, RBWM Kidwells Park Trust and The Shanly Foundation.

Visit www.norden.farm to find out more and book a spot in a workshop. 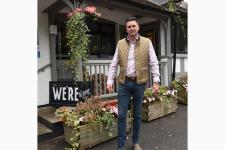