Welcome to Remember When..., which sees assistant editor Nicola Hine take a weekly look back through our archives, spanning nearly 150 years, to bring you snapshots from Maidenhead's past. 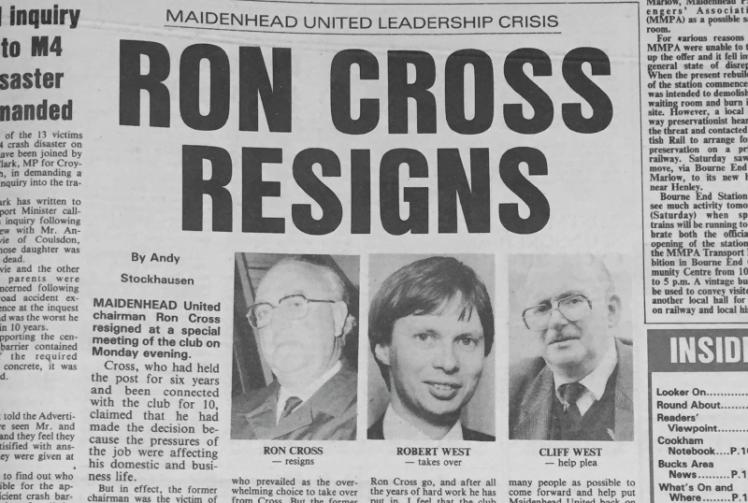 This week saw the renewal of the Advertiser’s sponsorship of Maidenhead United Football club, which has enjoyed more than a decade of stability under the chairmanship of Peter Griffin.

But the same could not be said back in September 1986 as the club faced a leadership crisis.

Chairman Ron Cross resigned at a special meeting of the club called by 16 members angered at a poor start to the season that saw United languishing at the bottom of the league.

The Magpies had lost all seven of their Vauxhall Opel League fixtures and had been dumped out of the FA Cup.

He was replaced by the then youngest chairman in the history of Maidenhead United, Robert West, 34.

The son of former chairman and club president Cliff West, Robert was a popular choice of United’s supporters.

He agreed to take over the vacated chairman’s seat rather than allow the club to slip into further chaos – but only on an interim basis while a replacement was found.

Robert, a solicitor, had been connected to the club since boyhood with some of his earliest memories being of standing on the terraces at York Road.

He had first joined the committee in 1971 and served as club press officer for more than a decade, producing the matchday programmes and had become vice-chairman in 1984.

He said: “As far as the future is concerned, I am taking on the job of chairman as an interim measure.

“Due to my work commitments I do not feel I could do the job justice in a full-time capacity.

“However, I feel I must see the club through this difficult patch and leave things in order for when a new chairman takes control.”

He called on those who had demanded the former chairman’s resignation to step forward to help the club regain some of its lost stability.

“I would hope new faces make themselves known and offer their services as soon as possible,” he said.