Only 10 and living with Crohn's 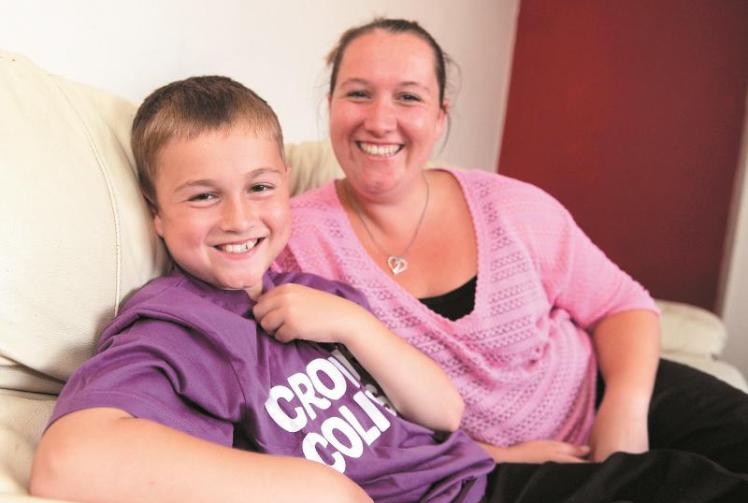 If you told the average primary school child they could swap their fruit and veg for milkshakes, fizzy drinks and sweets, I suspect many would be delighted.

But for six whole weeks this summer, that was all 10-year-old Josh Moxom was allowed to eat, after he was diagnosed with Crohn’s Disease.

The chronic condition causes inflammation of the digestive system with symptoms including abdominal pains and diarrhoea, tiredness and loss of appetite.

While the disease starts at any age, it usually appears for the first time between 10 and 40, meaning Josh is at the youngest end of the spectrum.

His mum, Amy Bannister, first suspected something wasn’t quite right when he went back to school in September last year.

“I noticed a change in his friends; they all seemed taller than Josh,” she said. “He kept saying that food was hurting his tummy, and then he started to lose weight.”

Josh added: “I kept being ill a lot from school and complaining of flare-ups in my belly.

“I was ill a lot more than my friends were and I had to go to the toilet a lot more.”

The youngster, who Amy says had never really suffered with colds and sickness like other children, was being sent home more and more often with suspected tummy bugs.

“He was being sick and nothing was agreeing with him,” she said.

At first, they suspected Josh might have an allergy or intolerance.

But by the Easter holidays Josh’s weight had dropped significantly – he was 19kg, compared to an average for his age of 31kg – and he had become really weak.

When he couldn’t keep anything down his worried dad Stephen took him to A&E.

Josh spent a week in Wexham Park Hospital. It was there that Crohn’s was first mentioned, but he was young, and his symptoms were similar to appendicitis, so he needed more tests.

He was transferred to John Radcliffe Hospital for a two-week stay, where further investigation, including a colonoscopy, revealed he had ulcers from his oesophagus downwards.

Biopsies confirmed he had the inflammatory bowel disease.

“At first I was a bit confused and I didn’t really know what it meant,” said Josh, who lives with his parents and two brothers in Boyn Valley Road.

“Then mum told me slowly and I was a bit sad.”

There is no cure for Crohn’s, but it can be managed, usually through medication, diet, or, in more severe cases, surgery.

Josh was placed on a six-week diet of Modulen, a protein powdered formula similar to baby milk powder, to help heal his ulcers and build up his strength and weight. The family used Nesquik to give it flavour, and Josh was allowed Polo mints, boiled sweets and full fat lemonade to keep up his sugar levels and stop his mouth getting dry.

“Josh could have anything from six bottles up, but if he started refusing to drink them he’d have to go back into hospital,” nursery manager Amy explained.

Crohn’s was not completely unfamiliar to the family – dad Stephen, 36, was himself diagnosed nearly a year ago – but the condition varies between patients.

“We’re still getting used to everything. It’s a bit different with children than for adults and every case is different,” Amy said. “Something that might suit Josh wouldn’t necessarily suit somebody else. It's the same with his symptoms as well.”

The Modulen diet helped, bringing Josh’s weight up to 26kg (he’s now reached 30kg), and he was given steroids to help with the inflammation.

However, lifestyle changes had to be made for the active youngster, who likes bike rides and football and supports Barcelona and Argentina.

He can no longer eat spicy foods, like the chicken curry he loved, or barbecue sauces. Meat must be fresh not processed, meaning no more chicken nuggets. Juices are a no due to the preservatives, and he struggles with fruit and veg.

Josh can also suffer with tiredness and fatigue, meaning after a six-week break from Larchfield Primary School – praised by Amy for its support – he could only return part-time to begin with.

It also means more planning for family days out, making sure Josh feels well, has enough medicine and the right food available, and crucially, there are toilets he can use.

“It’s always something we have to look for when we go out,” Amy said. “Some parks, when their toilets are shut, have been an issue in the summer holidays.”

Josh is now visiting the hospital monthly, with weekly trips to see the nurse.

Amy hopes speaking about his condition can help raise awareness of it. For example, many people aren’t aware that Crohn’s is a disabling condition.

“Not all people with disabilities are in wheelchairs. They look fine from the outside but it’s on the inside,” she said.

Amy also said people can be concerned it will spread. “You have to say to people ‘no it’s not a tummy bug, you can’t catch this’,” she added.

Josh has another aim – he wants to make some friends who are like him.

“I want to meet some other children with Crohn’s disease and see how it is for them and talk to them,” he said.

If you know a young person with Crohn’s who would be willing to meet Josh, email nicolah@baylismedia.co.uk to be put in touch with Amy.