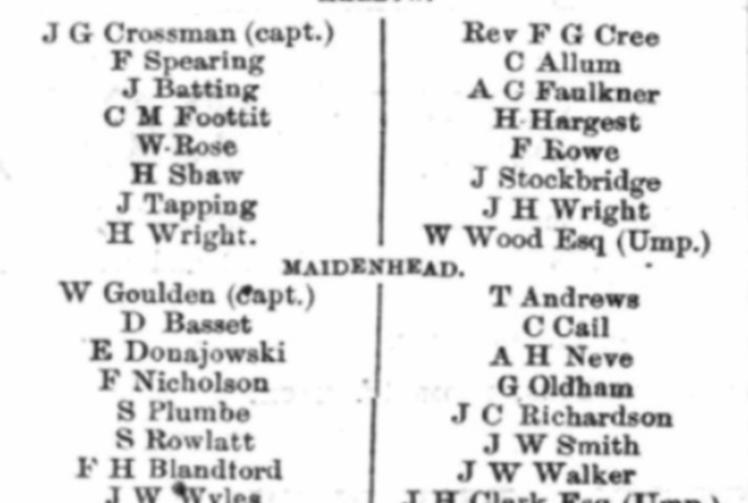 One hundred and 50 years ago this week, the Maidenhead Cricket Club committee gave their blessing to a ‘Foot-ball’ match to be played on the York Road site. The opposition for this fifteen-a-side match would be Marlow, a club who would become great rivals over the years.

It is apparent – from the Maidenhead Advertiser report of the game – that ‘the well-known ground’ – had previously hosted eleven-a-side cricket between men from the two towns.

The Marlow men arrived punctually for a 3:30pm kick off, dressed in their blue and white striped jerseys. Maidenhead wore ‘white, with a black and green maltese cross’.

The visitors won the toss, and the dimensions of the ground for football were such that Maidenhead were asked to play up hill, defending the goal at the railway end.

The opposite goal will have been close to where The Anchor pub stood until very recently. For the first half hour ‘one cannot venture to prophesy which side will. The Marlow team is very much the heavier, but the men from Maidenhead seem determined to make up in activity and pluck which they so much lack in weight’.

After a goalless first period, the first ever Maidenhead FC goal was scored by Samuel Plumbe. The excitement was such that Plumbe was ‘carried round the goal on the shoulders of his exulting confederates’.

The second goal arrived “shortly before five, obtained by captain William Goulden.” A first ever Maidenhead home win was sealed but the Advertiser reporter ventured that: “In a game so novel as foot-ball, it hardly falls within our scope to criticise, or render advice but we would venture to suggest, under correction, that a greater concentration of effort, in fact more playing into one another’s hands would be a decided improvement.”

Even these footballing pioneers were not exempt from criticism!

Kane's ready and able to impress for Maidenhead United